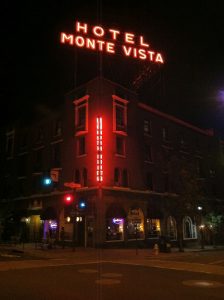 It seems like every town in Arizona has a haunted hotel. This one is in Flagstaff, where the Hotel Monte Vista has been the city’s icon for over 90 years. The Monte Vista has had a lively history, and it’s far from over. The hotel was built in 1927, having been funded by the taxpayers, and was one of the few hotels in America to be publicly owned at the time. Monte Vista was built right off the historic Route 66, and sits near the city’s railroad station, making it a prime hotel for those passing through town. Early on, the hotel made a name for itself in show business. The Monte Vista hosted the first radio program in America hosted by a woman, ran by Mary Costigan. It later became the chosen hotel for actors during the Western movie craze of the ’40s and ’50s, hosting big names like John Wayne and Bing Crosby. It was actually John Wayne who reported the first ghost sighting in the Monte Vista in the late 1950s. Wayne described the ghost as a friendly, benevolent spirit after he encountered the ghost in his hotel room. The Monte Vista’s hauntiness stems from the eclectic characters that came through its doors over its almost century-long history. The bank robber who was found dead in the bar. The constant barfights and shootouts. The strange man who hung meat from the chandelier in his hotel room, who was then found dead a few days later. The two sex workers who were murdered and tossed out of the third story window. Then there’s the network of underground tunnels throughout Flagstaff that connected to the hotel. Brothels and opium dens flourished in the tunnels just beneath the streets. Today, guests report all sorts of strange phenomena, like the phantom bellboy who knocks on doors and disappears, the spirits who move furniture around, and strange phantom prank calls. Then, there are things being constantly knocked down in the guest rooms with no logical cause. Ghosts have even been seen drinking in the lounge. Tucson’s Hotel Congress might be the most haunted hotel in Arizona, but the Hotel Monte Vista sure gives it a run for its money.

In the 1920s, tourism in Flagstaff was growing, and the city had very few places open for accommodations. The city passed a municipal ordinance that created a bond to raise money for a new hotel in 1924. Thanks to efforts by local townspeople, the city raised $200,000 to begin the building of the hotel. The hotel was finally completed in 1927, making its grand opening on New Years Day.

It was originally named the Community Hotel to honor the people who contributed to its creation. The hotel had seventy-six rooms, a two-story bar and lounge, a post office, headquarters for the Coconino Sun newspaper, and hosted a radio show. The radio show was the first to be run by a woman, Mary Costigan, who ran her daily three-hour radio program from room 105. The Community Hotel became Flagstaff’s hotspot, and they soon realized they needed a name change, so the hotel staff ran a naming contest. A twelve-year-old girl won the contest and gave the hotel its current name, Monte Vista. A popular phrase began being echoed around Flagstaff, “Meet me at the Monte V.”

Prohibition came around in the 1930s, and bars all around Flagstaff were ordered to close. Rowdy and disobedient as the Monte Vista was, they kept serving alcohol, becoming a speakeasy when alcohol was outlawed. The speakeasy was hardly a secret, and the hotel bar was shut down in a raid in 1931. They opened up slot machines to keep customers interested. Rumors say that the secret network of tunnels under Flagstaff was used to smuggle moonshine, host illegal card games, and served as a den for opium use and brothels during Prohibition. The tunnels were dug by Chinese migrants and businessmen as extra storage space for their businesses, and as a mode of safe transportation when faced with racism. The tunnels ended up becoming an underground black market during the Prohibition Era.

During the Western movie craze of the 1940s and ’50s, western-style films were shot in nearby Sedona and Oak Creek Canyon. Actors and celebrities stayed in the Hotel Monte Vista to relax between movie shoots, hearing about its lively atmosphere. A scene from Casablanca was even filmed in the hotel. John Wayne, Humphrey Bogart, Bing Crosby, Gary Cooper, and Spencer Tracy all stayed at the Monte Vista while shooting movies. It was John Wayne who first discovered that the Monte Vista was haunted during the 1950s. A ghost entered his room at night, but it was surprisingly friendly and quite benevolent.

The history of the Hotel Monte Vista was rife with wild barfights, poker games, shootouts, and outlaws on the lam. In the 1970s, a group of bank robbers ran to the hotel to hide out after robbing a nearby bank. One of the robbers was shot in the encounter. They made it to the hotel quickly enough to book a room and grab a drink at the bar. Unfortunately, the gunshot wound proved too much for the wounded man, and he died at the bar before he could even sip his drink.

Ghosts of the Hotel Monte Vista

Ghosts have made themselves cozy at the Hotel Monte Vista over the course of its 90 years of operation. The bank robber who died at the bar is one of them. He’s been seen hanging around the bar, usually seen from the corner of the eye. He tends to greet the bar managers upon opening, and guests often report feelings of being watched, or feeling chills down their spine while trying to drink. Though it’s likely the ghost of the bank robber, many say that because so many shootouts went down at the hotel, the ghost could be one of several other gunslinging outlaws.

In the early 1940s, a john brought two sex workers back with him to room 306 in the Hotel Monte Vista. Before the night was over, the two women were murdered, and their bodies were tossed out of the window onto the cold floor below. Guests who stay in room 306 still feel the presence of the two women, who are said to have a grudge against men. They often report intense feelings of being watched, and male guests often have similar dreams of being strangled and held down. Some say the guests are reliving the night of the murder.

The second floor is home to all sorts of unusual phenomena. In room 210, many guests report a phantom bellboy who knocks without anyone having summoned for room service. Guests are surprised when they open the door to an empty hallway. Room 220 was home to a long-term guest who had a weird habit of hanging meat from the chandelier. Why he did it? No one knows. But his body was found by a housekeeper one morning after having been dead for several days. Room 220 is now known for all sorts of shenanigans. Unusual noises come from the room when it’s empty, including coughing, laughter, and full-blown conversations. A maintenance man was once making repairs in the room and turned off the lights and locked the door on the way out, and came back to find the lights and television on, with the volume on full blast.

The ghost of a crying baby can be heard in the basement. Nobody knows the true story behind the crying baby, but some locals say that a prostitute who got pregnant was forced to kill her child after giving birth in the tunnels under the hotel. Guests and staff who venture down into the basement often report hearing the sounds of a crying baby when the basement is empty. Another strange apparition in the basement is the six-foot-tall Shadow Man. He’s a tall menacing figure who appears to strangers who stumble into the basement, attempting to intimidate them. He also tends to appear to delivery drivers and repairmen, again trying to intimidate them. Nobody knows where he comes from, but he’s probably the scariest of the Hotel Monte Vista’s residents.

Many other strange phenomena happen around the hotel, none of which can be attributed to any ghosts in particular. Phantom footsteps often follow guests down the halls, and disembodied voices whisper in their ears. Then there are spirits who make weird noises in empty rooms and move furniture around. The staff at the Hotel Monte Vista have learned to live with the ghosts, and they consider it a running gag. Guests who are unaware of the haunted nature of the hotel are in for a rude awakening.

The Wild West has seen a ton of bloodshed, and where there’s death, there’s ghosts! Read about the Vulture Gold Mine, once the most prosperous mine in the state, which was then abandoned became a ghost town. Check out Yuma Territorial Prison, where you can still hear the shackles rattling around the ankles of ghostly prisoners. Book a stay at the Hotel San Carlos, which was doomed right after the grand opening when a woman committed suicide by jumping from the roof. You can also read about the top ten most haunted spots in Phoenix right here!