The Domes at Casa Grande 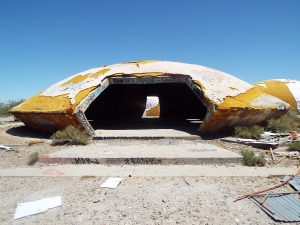 Just south of Casa Grande lies a group of eerie structures known as The Domes. The collection of round concrete buildings have been abandoned for nearly thirty years and are a curiosity to both tourists and Pinal County locals alike. The Domes are shrouded in mystery with all sorts of folklore. Most passersby regard the Domes as a roadside stopover, a cool place to explore and take a few photos. Local teenagers also hang out there, using the remote location to stage bonfires and drinking parties. But those who are familiar with the Domes say that the site is home to something far more sinister. Many report seeing ghosts and hearing voices, while others say they hear tapping sounds on their vehicles when approaching the location. Some even say that the Domes are frequented by Satanists, where they perform rituals and animal sacrifices.

Who built The Domes?

The origins of the Domes are actually pretty benign. In 1982, an electronics company called InnerConn Technology announced its move from California to Arizona. InnerConn manufactured circuit boards for computers and watches and was gearing up to make it big during the coming tech boom. The owner of  Innerconn, Patricia Zebb, decided on the dome design because it was cheap, quick to build, and would help with temperature regulation in the hot Arizona sun. The foundations were laid out, and steel frames were erected around giant balloons. The balloons were coated with polyurethane foam, which hardened to create a layer several inches thick. Construction crews then poured the concrete over the frame. Another layer of concrete was then added to make the outer shell of the structure. Each building took about six weeks to build and cost about $150,000 apiece.

There are four structures in total; one shaped like a flying saucer, which was going to be the main office building. The other three are long and caterpillar-like in appearance, each being made of four smaller domes. Those structures were meant for manufacturing. There’s also a network of narrow tunnels running under the site, intended to be ventilation shafts, which also serve to pump manufacturing fluids around the complex. There were supposed to be seven buildings in all, but three were left unfinished. The foundation for these buildings is still visible and easily seen from the air. The shape bears a resemblance to the three other caterpillar-like buildings, indicating that they were also used for manufacturing.

Unfortunately for Patricia Zebb and InnerConn Technologies, the money ran dry. They defaulted on a loan, and their bank took control of the company’s assets. Land surveyors also discovered that the groundwater in the area was contaminated, further cementing the facility’s bleak future. The Domes remained an unfinished project, left to rot in the Arizona desert.

The Domes became a permanent fixture in the desert just south of Casa Grande. They’re the only thing visible amongst the huge expanse of flat land. Like many abandoned buildings, the Domes quickly became a haven for graffiti artists and drunk teenagers. Locals also used the location as an illegal dumping ground, leaving behind tires, furniture, and hazardous waste. Since it is the Southwest, the Domes also attract a steady stream of UFO hunters looking to catch an alien spacecraft.

Over the years, the concrete on the Domes began to weaken and fall apart. There are holes in the ceiling. On a few of the buildings, most of the outer concrete shell has fallen off, exposing the polyurethane coating. The inside walls were painted with graffiti. The remote location made it an ideal place for parties, raves, underage drinking, and drug use. With so much traffic and unusual activity, the ghost stories and conspiracy theories began to spread like wildfire.

Ghost Sightings and Satanic Rituals at the Domes

The Domes are abound with ghost stories. Visitors report unusual sounds and strange figures lurking around the site. Some have heard children screaming in the distance. Others have been stalked by mysterious figures. Those brave enough to visit at night might hear someone faintly whispering in their ear. Upon entering the Domes on a windy night, the holes in the concrete coupled with the structure’s unusual shape make a highly unusual howling sound, which scares away many of the visitors. Many say they feel a sense of uneasiness and panic upon entering the Domes.

The Domes are also the burial ground site for the Anasazi tribe, ancestors of the modern Pueblo, adding to the spooky vibe. People from the Tohono O’odham tribe also occupy reservations near the area. Originally from the Gulf of California, they were moved to Arizona over the years. A medicine man from the Tohono O’odham supposedly cursed the lot, which may have been the catalyst that caused InnerConn to go bankrupt.

Other unusual occurrences have been reported, such as malfunctioning electronics, tapping and knocking noises on vehicles parked nearby on Thornton Road, and being attacked by disembodied hands. Some theorize that strange electromagnetic phenomena may be to blame.

There are supposedly a few murder victims buried at the Domes; considering the remoteness, the possibility is a real one. Many say that the strange figures seen wandering around may very well be the ghosts of the murder victims, or worse, the murderers themselves.

According to the locals, the Domes also attract occultists. Witnesses say that a cult of mysterious robed figures uses the Domes to perform blood rituals and sacrifices in an attempt to channel energy from the shape of the structure. The occultists have claimed that the unique shape allows them to open portals and summon demons from another dimension. According to some, the cults not only sacrificed animals in their rituals but humans as well. There is some evidence to back this up. Police have found the remains of a dog in the Domes, as well as parts of a human body stuffed into a plastic bag.

A few visitors say they have been followed home by demonic apparitions after leaving. They claim to have been slowly driven insane by a mysterious dark force that lingered after spending some time at the Domes. It’s possible that the satanic cult may have succeeded in opening a dark portal and have summoned some otherworldly demon.

Despite the stories and folklore, the Domes remain a hangout spot and an interesting stopover for tourists. The graffiti and architecture make it a popular location for photoshoots and drone photographers. Unfortunately, the Domes are set to be demolished soon. In 2017 the Pinal County government ordered the site to be cleared, and with good reason. Piles of hazardous waste and a crumbling foundation means that it’s a liability for the municipality. Given the drug use and underage drinking parties, someone’s bound to get hurt. The Domes and the surrounding areas are a safety hazard and a disaster waiting to happen. One of the buildings has already collapsed. Though no steps have been taken towards demolition, local law enforcement monitors the Domes, and visitors may face a fine or arrest if they are caught trespassing.

Arizona is a weird place, with lots to see. Cowboys, native burial sites, UFOs; Arizona’s got it all. Read up on Arizona’s haunted history! Like the Hotel Congress in Tucson, one of the most haunted hotels in the country, and once the hideout of John Dillinger. Perhaps have a steak at Monti’s La Casa Vieja, a haunted restaurant where the city of Tempe was founded. Go back in time at Pioneer Village, a collection of buildings from the Old West, each with their own resident ghosts. You can also read about the top ten most haunted spots in Phoenix right here!