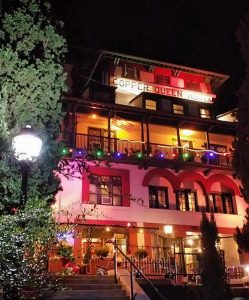 We come to you again from the border town of Bisbee, Arizona. This time it’s the Copper Queen Hotel that haunts us. Constructed in 1902, the Copper Queen is Arizona’s longest continuously operated hotel. With over 100 years of history, the hotel has picked up some ghostly guests along the way. The Copper Queen Hotel was originally built by the Phelps Dodge Mining Company to host potential investors for its nearby copper mine. The 48 room hotel has a restaurant and saloon, and no two rooms are the same. At least three ghosts live in the hotel. The most well known is a woman named Julia Lowell, a sex worker who used the hotel to conduct business while she was alive. Her ghost is most often seen on the second and third floors, and they say she often attempts to seduce the male guests. In Julia’s honor, the hotel named a room after her, the Julia Lowell Room. A young boy named Billy also haunts the hotel. The boy was the son of a hotel worker, and drowned in the nearby San Pedro River while going for a swim. His spirit still lives on in the Copper Queen Hotel. Billy’s ghost can only be seen by children, but adults have heard Billy giggling or crying. Parents often report seeing their children talking and playing with an invisible child, and he’s often seen jumping on the couch in the lobby. Billy’s blamed for a lot of the mischief around the hotel, like missing stuffed animals or random objects floating around. Another ghost is that of an older man with a top hat and black cape. The bearded man is often seen smoking a cigar on the fourth floor. A smoky aroma is present just before and after he appears. He tends to startle many of the guests when he appears randomly in their rooms. Though three ghosts have been confirmed to live in the Copper Queen Hotel, some say that there may be as many as sixteen ghosts roaming around the building.

History of the Copper Queen Hotel

Founded in 1834, the Phelps Dodge Mining Company was one of the major mining companies in the US, and remained so until their acquisition in 2007. They also operated the spooky Jerome Grand Hotel while it was still a hospital. The company did much of their business in Arizona, and was headquartered in Bisbee until 1961. At the turn of the 20th century, they needed a place to put up their prospective investors, so they began building the Copper Queen Hotel in 1898. The hotel was completed in 1902, and originally had 73 rooms, with one bathroom on each floor.

The hotel was built with two foot thick walls to keep it cool during the summer. Though the hotel was originally built for guests invited to Bisbee by the Phelps Dodge Corporation, the Copper Queen Hotel eventually became a hotspot for sightseers and travelers. A fun-loving culture evolved around the hotel, with weddings, gatherings, and parties being commonplace.

Eventually, major changes were made to the Copper Queen. The hotel was renovated, and each room was given its own private bath. This lowered the number of rooms from 73 to 48. The hotel became more luxurious, as it became less of a stopover and more of a destination. The parking lot was demolished and replaced by a swimming pool. Big names like Marlo Brando, John Wayne, Julia Roberts, and Harry Houdini have all found comfort in the Copper Queen Hotel.

Ghosts of the Copper Queen

The Copper Queen Hotel doesn’t hide its haunted past. On the contrary, it advertises its hauntings, hoping to attract thrill seekers and ghost hunters. They even have a ghost journal, where guests can record their paranormal experiences. Most guests have some sort of encounter with the supernatural, while some claim to have a relatively uneventful stay.

The most often seen ghost in the Copper Queen is that of Julia Lowell. She’s described as an attractive woman in her thirties, and often tries to seduce men by whispering in their ear or stroking their feet. Julia was a sex worker back when prostitution was legal in Arizona. She used a room on the third floor to conduct her business. She was especially fond of one of her clients, whom she eventually fell in love with. She professed her love to him, but he didn’t reciprocate. Overcome with grief, Julia committed suicide in her hotel room.

Julia’s spirit stayed in the Copper Queen Hotel. She’s often seen around the second and third floors, usually on the west side of the building. She’s known for flirting with male guests, often whispering in their ears or playing with their feet. Guests have also seen her dancing at the base of the staircase. The room where she would take her clients is now called the Julia Lowell Room.

Billy was the son of a hotel worker who would always play in the halls and dining room with the other children. When Billy was about eight years old, he went for a swim in the San Pedro River. The strong current took Billy downstream. The force of the current proved too much for young Billy, and he drowned as he struggled to get back to shore. His death was one of the bigger tragedies at the Copper Queen Hotel, as he was loved by the hotel staff. Billy’s spirit never left, and he’s often seen playing in the hotel lobby, just as he would when he was alive. Only children can see Billy’s spirit, but adults can still hear Billy’s laughter every so often, as well as the pitter-patter of his invisible feet. Children have been seen talking to and playing with an invisible child, and often attempt to “introduce” the ghost to confused parents, convinced that the child has an imaginary friend.

Billy is a mischievous ghost, and often plays tricks on unsuspecting guests. He often steals and hides their personal belongings. Stuffed animals, wallets, and clothing have all gone missing, only to be found in another part of the hotel. He also tends to move furniture around the hotel rooms when nobody is there, leaving guests confused. One guest claims to have had her room key stolen, then saw it mysteriously floating in front of her face while she rode the elevator. Some guests claimed to have been tapped on the shoulder by an invisible hand, which also can be chalked up to Billy’s mischievous ways. Many have heard a childish laughter after being the victim of Billy’s tricks. He does have a soft side though, as many claim to hear a boy crying near the sound of running water, as if being reminded of his tragic death in the San Pedro River.

One ghost in particular remains rather low-key, but his presence is still felt by quite a few guests. The spirit of an unnamed bearded man in a black cape and tophat is often seen hanging around the fourth floor. Guests say that he’s always smoking a cigar, and his presence is accompanied by the smell of cigarette smoke. His intimidating appearance tends to startle the guests, but he means no harm. He usually appears in shadowy areas around the fourth floor, scaring guests when they catch a glimpse, especially when he suddenly appears inside one of the guest rooms.

Though the Copper Queen Hotel has three known ghosts, paranormal experts and investigators say that there may be up to 16 different entities in the building. Many of the supernatural experiences may be falsely attributed to Julia and Billy, when in fact, another ghost is to blame. Guests claim that many of their encounters did not fit the description of the three known ghosts. Doors shaking or slamming shut, phantom phone calls, and pictures thrown off the walls are not occurrences that can be attributed to any ghost in particular. Multiple guests claim to have had their electronics suddenly malfunction, with cameras and cell phones being the ghost’s main targets.

Learn more about the haunted history of Arizona!

Arizona’s mines are known to attract some creepy spirits. Bisbee was once a thriving mining town, known for its copper. The Oliver House is another haunted hotspot in Bisbee, where over 26 people were killed over the years, including twelve during a mass muder by a crazed policeman. The Vulture Gold Mine was once the most prosperous mine in the state, but was shut down during World War II. The Vulture Mines were known for attracting thieving bandits, who were punished by death. Their ghosts are known to harass unsuspecting visitors who stray too close to their graves. The city of Tombstone was one of the roughest mining towns in Arizona, and it doesn’t get any rougher than the Birdcage Theatre, where a woman had her heart carved out of her chest in a fit of jealous rage. The ghosts of the Birdcage tend to be a bit rambocious. You should also read up on the top ten most haunted spots in Phoenix before you plan your next visit!