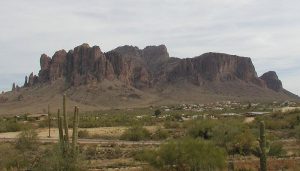 The Superstition Mountains, with a name like that you might as well give away fancy proton-backs, of the Ghostbuster variety, at the visitor’s center, is a series of jagger tooth mountains in Arizona just the east of Phoenix. The area is filled with ghost tales, monster encounters, and, yes – you can’t have spooky mountains without an alien highway – UFOs. They are mysterious, they are cool as ice, and for all those Dark Tourism enthusiasts, they are full of legends and weird happenings.

Some Facts about the mountains:

The Lost Dutchman’s Gold Mine

So, there, that’s the skinny in case you want to pack a lunch and have a picnic. But, loyal reader, you came here for the things the tourist board fails to mention. You came here for the nasty bits that are constantly swept under the rug. You came for the yellow rag gossip. The headline that entangles those mountains in macabre tales and sinister ghost fantasies is the legend of the Lost Dutchman’s Gold Mine.

The Lost Gold Mine At Superstition Mountain

The Lost Dutchman’s Gold Mine is, according to folktales, a magnificent, rich, Scrooge McDuck like repository of gold hidden somewhere in southwestern United States. I’m talking Smaug levels of the shiny stuff. And, where praytell do most folks believe said El Dorado is safely hidden… Why, in the Superstition Mountains, near Apache Junction.

Like all great legends and Indiana Jones-like ventures, the search for the Lost Dutchman’s Gold Mine is littered with betrayal, spirits, backstabbing desperados, unexplained disappearances, and death.

The Tale of The Mine

The mine is named after German immigrant Jacob Waltz,1810–1891. German? Wasn’t it Dutch? Ahh, here’s the chronological faux-pass. Back in those days, the American term for German was “Deutsh”... one misspelling here, an illiterate vagrant telling tall tales over there, a shoddy reporter, and Deutsh suddenly transformed into Dutch.

Anyway, the great west – after Grant decided to Manifest Destiny and promote those great plains – “maybe they’ll forget all that Civil War squabble if they start to settle into lands without so much emotional baggage” – tended to promote El Dorado like tales. Everyplace had a lost mine. Tack a map onto a wall, toss a dart and chances are you’d hit an outskirt of nowhere with a small Fort Knox in its hills.

The story differs but… here’s the most common take, mind you there are over 100 different versions of the Story.

Members of the Apache tribe were said to have a truly valuable gold mine located in the Superstition Mountains. Famed Apache warrior Geronimo was oftentimes sometimes discussed in the story; because it’s always good to shoehorn a celebrity into an urban legend.

Most stories go like this, the family of a man called Miguel Peralta struck gold by accident – they were just passing by – and started drilling the mine. That was circa 1850. The family is later attacked and butchered in the so-called Peralta massacre.

Dr. Thorne starts to investigate. In an act of kindness, Throne treats an ailing Apache chieftain. The chieftain, overtaken by the act, blindfolds the doctor and takes him on a trip to the mines.

The blindfold is taken off, the shine of the yellow stuff rattles Thorne’s mind, the chieftain speaks,

“Take as much gold ore as you can carry.”

Thorne fills every pocket, flap of clothing, and fleshy orifice with the nuggets. He’s led back to town and the tale spreads like wildfire.

It’s now the 1870s. Jacob Waltz, “the Dutchman”, a mischievous canard if ever there was one, becomes obsessed with the mine. Waltz forms an expedition party; two Peralta descendants, an archaeologist, and Jacob Weiser. Weiser was the man’s best friend and confidant. They trek into the mountains. Months pass, years some say, until one day Jacob comes back – battered and bloody – atop a lame mule. Everyone else? Gone.

A corpse is later found and IDed as Weiser; coroners unable to state whether the wounds were caused by Apache weapons or American-made knives. Some certain that the natives killed the party. Others that it was Waltz. Others that it was the ghost of the Peraltas. Others, sure that more vile deadly creatures guard the mines.

Jacob, meanwhile, the lone survivor, is near catatonic. The man is barely alive. For the next 20 years, he falls in and out of consciousness, whenever he wakes it’s just garbled speak and horrific tales; he’s enveloped in kaleidoscopic delirium… “Something,” a doctor once told his family, “having chewed at his sanity and left nothing but brittle bones.” He dies, screaming from a nightmare in 1891.

Over the years, subsequent search for the mines has only lead to heartache and death. There have been tales of U.S. Army soldiers that are said to have stumbled onto a river of almost pure gold in or near the Superstition Mountains. The soldiers have stalked back to town, fistfuls of gold but their sanity shot, only to die a day later… or in one case, murdered while rambling on and on about the “albinos” in their hospital room.

Adolph Ruth is really the amateur explorer and treasure hunter that made the mines into a national phenomenon. Up until Ruth’s disastrous expedition, the mines were little more than a footnote in the history of Arizona; one of a thousand so-called “lost mines” that peppered teh state.

Ruth’s son Erwin C. Ruth heard of the Peralta mine from a man called Pedro Gonzales. According to the account, 1912 Erwin C. Ruth gave s Gonzales legal aid, saving the riff-raff from almost certain imprisonment. In appreciation, Gonzales told Erwin about the Peralta mine in the Superstition Mountains and an antique map of the site. Erwin gave the data to his father Adolph.

In June 1931, Ruth set out to find the lost Peralta mine. After moving to the area, Ruth lingered numerous days at the ranch of Tex Barkely to outfit his expedition. Barkely urged Ruth to abandon his search for the mine: “the area and the mines cursed and full of devils.”

Ruth’s response? A raspberry into the face of common sense. Ruth ignored Barkely’s help and set out for a two-week stint into cliffs.

Ruth vanished while hunting for the mine in the summer of 1931. His skull – with two bullet holes – was recovered about six months after he disappeared.

“Dr. Hrdlicka positively identified the skull as that of Adolph Ruth. He further stated, after examining the two holes [in the skull], that it appeared that a shotgun or high-powered rifle had been fired through the head at almost point-blank range, making the small hole when the bullet entered and the large hole when it exited”.

The story became a national sensation and suddenly everyone knew about the mines and its horror riddled backstory.

Since Ruth’s death, there have been numerous other deaths or disappearances in the Superstition Mountains.

People from the town below certain that only death and demons travel across Superstition Mountain at night. Lights, screams, and shadows – of Apache armies – have been reported. Bands of roaming cannibals are said to hunt the area… and the curse of the Lost Mine to many isn’t a tall tale but a stark reality.

For more macabre tales check out our Top Ten list of haunted spots in Phoenix.