Posted by george in Phoenix Ghosts 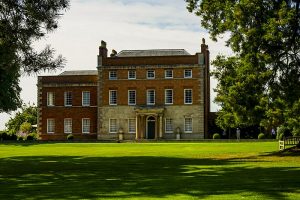 Northern Arizona University is well known for its haunted happenings. There are stories of ghosts, suicide rituals, and blood-curdling screams in the dead of night. But nowhere in NAU are the hauntings more frightening than at Morton Hall. Ever since the suicide of a young student named Kathy, life at Morton Hall has been a bit spooky. While accounts may vary, the prevailing theory is that Kathy hung herself in the building’s stairwell. A few weeks after her body was found by maintenance workers, a stillborn baby was found in the basement. Nobody knows if there’s any connection. After her death, students reported seeing her ghost around the building. She always wears a blue nightgown and was sometimes spotted with a rope around her neck. Students also report hearing phantom footsteps, faucets turning on and off on their own, and radios or television sets turning on randomly. Those who see her apparition say that the walls turn pink when she appears, and notice a strong scent of roses. No official records exist about Kathy’s suicide at NAU, as the school didn’t want any black marks on their name. The story wasn’t independently verified until 1992. There are also two other ghosts living at Morton Hall. Two students who were making love in an underground tunnel drowned when a nearby water pipe burst open. The two souls can still be heard laughing, making love, and banging on the water pipes in the basement of Morton Hall.

Morton Hall opened in 1918, first opening as a woman’s dormitory. It was built in the Gothic Revivalist style of architecture, giving it a haunted vibe. The building was named after the head of the English Department at the time, Mary Morton Pollock. She worked to provide financial assistance to students who were struggling and helped them finish their education. Morton Hall originally has a music room and dining area on the first floor, but the space was turned into a library.

The layout of Morton Hall has given quite a few students the creeps. The building glows white at night, which along with the architecture gives off a haunted vibe, but it’s the interior that really sends chills down their spines. The building is hard to navigate, and the halls are like a labyrinth. There are mirrors at the end of every hallway and atop every staircase. The door to the balcony remains locked due to the area being condemned. Though the NAU has made some renovations to Morton Hall, students say the building still has a sad and lonely aura.

Sometime in the 1950s, a student named Kathy was living in Morton Hall. It was near Christmas, and she was expecting her parents to send her home for Holiday Break. Right before the semester ended, Kathy received a phone call. Her family had gone bankrupt. Her family’s businesses had fallen apart, and they were riddled with debt. Her parents couldn’t afford a way for Kathy to get back home. She would be spending the holidays alone in Morton Hall. If that wasn’t enough, Kathy’s boyfriend dumped her for another woman. She thought he would propose to her during the holidays, but he had other plans. Kathy was devastated. In a few short days, her life had fallen apart.

Kathy couldn’t take the humiliation of being poor and alone, especially on the holidays. She decided it was time to end it all. While wearing her favorite blue nightgown, Kathy went up the staircase toward the building’s attic, carrying a rope. She tied it to a water pipe and stuck her head through the noose. Her body was found by maintenance workers two days later.

A month later, a stillborn baby was found in the basement. Though there is no official connection to Kathy’s death, some say the baby was actually Kathy’s child. This could explain why her boyfriend left her, assuming he knew she was pregnant.

The ghost of Kathy restlessly lives on in Morton Hall. The residents of the building have been telling her story for decades. Students claim to see her ghost all over the building, though she’s most often spotted in the staircase leading to the attic, where she hung herself, or her old dorm room on the second floor, room 200A. Witnesses say she was always seen wearing her blue nightgown, which she wore the night of her suicide. Some even say they’ve seen her with a rope still tied around her neck. When she’s seen in the stairwell where she was found, she’s usually seen crying. The sounds of a woman sobbing are often heard in the stairwell even when Kathy’s ghost doesn’t appear.

Kathy’s ghost usually appears along with the scent of roses, which were her favorite flower. Students also say that the walls turn pink as her ghost materializes. Pink was her favorite color. Even though encountering a ghost is usually a terrifying experience, Kathy brings a somewhat pleasant aura when she appears. Though, many of the students are still quite terrified.

Even if they don’t encounter Kathy’s ghost directly, students are still subject to some strange experiences. Many report that the faucets in the bathroom and kitchen randomly turn on. Television sets and radios might switch on and off on their own, and when their radios are turned on, it’s always tuned to an “Oldies” station, usually playing music from the 1950s.

Some might hear phantom footsteps just outside of their door or inside their rooms. Other students have had their covers ripped from their bed whilst asleep. Students say they know when she’s near because the lights start flickering. Even if her ghost doesn’t appear, the smell of roses might fill the air. The area where she died has yet to be painted over, as the paint keeps peeling off. Most students are too afraid to go to the third floor, only going up if they have to. The staircase where she killed herself is off-limits to many students as well, as they rather not take the chance of having to encounter a ghost on the way to class.

No records exist pertaining to Kathy’s suicide at NAU. At the time, colleges put their reputation over the lives of their students, especially when it came to women. The University covered up her suicide, making no record of it ever happening. The story of Kathy wasn’t verified until 1992, after an interview with the female employee who found her body. The cover up could be part of the reason why Kathy’s spirit still haunts Morton Hall.

Though the students are absolutely frightened by Kathy, it’s hard not to have sympathy for her. She was a bright student, on her way to a great future, and her life fell apart in a matter of days. It’s difficult to imagine the pain she must have felt to end her life so suddenly. Now her spirit is doomed to roam Morton Hall in eternal sadness. Maybe some sense of understanding from the student body will finally put her soul to rest.

The Drowned Lovers of Morton Hall

Kathy isn’t the only ghostly resident in Morton Hall. The spirits of two lovers reside in the basement. The story goes that the adventurous couple were making love in an underground tunnel connected to the basement of Morton Hall. A water main in that same tunnel just happened to burst while the two were inside. They were trapped by the rising waters and drowned. Their spirits still haunt the basement, and students report strange noises coming from beneath Morton Hall. They’ve been heard laughing, giggling, moaning, and making love underneath the building. They also like making a ruckus by banging on the water pipes.

The Southwest is a strange place. Cowboys, UFOs, and Native American folklore make for an incredibly haunted scene. Check out the Domes at Casa Grande. The bizarre structures look like an alien spacecraft and were used for Satanic rituals. Pay a visit to Vulture Gold Mine. Once the most prosperous mine in Arizona, now it’s a haunted ghost town. Lay your head at the Hassayampa Inn, where a suicide made the hotel a haunted Arizona landmark. You can also read about the top ten most haunted places in Phoenix right here!