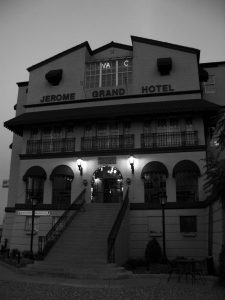 Sitting ominously on the hillside above the mountain town of Jerome sits the Jerome Grand Hotel. This historic hotel was once a state-of-the-art hospital, and it was once regarded as the most modern medical facilities in the West. The building was first constructed in 1927, then called the United Verde Hospital, and was built to accommodate the growing population of miners. The hospital has since become the Jerome Grand Hotel. The hotel sits at about 5,200 feet above sea level, offering fantastic views of the Verde Valley. But the views aren’t the only attraction. Amateur ghost hunters flock to the Jerome Grand to see if the hotel is genuinely haunted. Ghosts and spirits run amok in the hotel, many of them leftovers from its hospital days. Guests have reportedly heard labored breathing, wheezing, and voices coming from empty rooms. Paranormal experts have also uncovered the ghosts of doctors and employees still roaming the building, still doing their jobs almost a century later. The ghosts even have a pet, a spirit cat that wanders around the building, meowing and clawing at guests.

In the early 20th century, the United Verde Mining Company was Jerome, AZ’s major employer. In 1917, while blasting for copper, they hit a fault, shifting the ground and causing significant damage to the town’s main hospital as well as Jerome High School. United Verde began construction on a new hospital, which was completed in 1927.

The new United Verde Hospital took full advantage of the cutting-edge technology of its time. It was both fireproof and immune to earthquakes. The hospital had a slew of amenities that were considered luxurious or extremely modern, including patient call lights, an ice-making room, an Otis self-service elevator, laboratories, X-ray machines, and surgical facilities. By 1930, it was by far the highest-rated hospital in Arizona, and the West.

Phelps Dodge Mining Corporation took over United Verde Mining and continued the operation of the hospital until 1950. The mining operations left Jerome 3 years later. The town took on an ominous feeling, as the once busy streets became empty, and the now-abandoned hospital overlooking the town became an eyesore. Afraid of vandals and vagrants, Phelps Dodge hired caretakers and enlisted local police to watch over the building. Though they knew the building wouldn’t be used as a hospital ever again, the building remained furnished as such. In 1980, Manoah Hoffpauir, one of the caretakers hired by Phelps Dodge, committed suicide. He was found hanging in the engineer’s room. Afterward, the company relied solely on the police to watch the building.

Vandals started getting to the property, which gave Phelps Dodge another incentive to sell the building. Larry Altherr bought the building in 1994 and began laying plans for a luxury hotel.

Altherr had to make some accommodations to make the Jerome Grand operational. Jerome was a sleepy town, and the roads coming in and out of the hotel were devoid of shops and restaurants. The hotel also needed a parking garage. New restaurants were opened near the hotel, and a parking garage was excavated. The restaurant inside the hotel was leased out and named the Asylum restaurant.

The Jerome Grand Hotel opened for business in 1996. Altherr still made some improvements over the years. In 2003, a green 1928 Rolls Royce Phantom was parked in the hotel garage as an ornament. The car is one of a few thousand in the world, and the Jerome Grand staff only bring it out on parades. In 2006, the building was repainted and touched up to make it “less creepy.”

Ghosts of the Jerome Grand

Many of the ghosts are leftover from the hotel’s hospital days. Patients who passed away still inhabit their hospital wards. Guests have heard coughing, wheezing, and labored breathing from empty rooms. Some presume these to be from patients who may have had tuberculosis, which was a common ailment at the time. Guests have also seen the ghosts of two hospital employees and a patient roaming the hotel. A male doctor carrying a clipboard, a female nurse, and a female patient in a gown have been seen wandering together around the halls.

While the Jerome Grand was still abandoned, two separate psychics caught on to a ghost who claimed to be the “Head Nurse” or “Nurse in Charge”, who seemed to hang out in what is now the restaurant and lounge area of the hotel. This area was originally the dispensary and main entrance of the hospital. The Head Nurse was distraught with the removal of the original dispensary desks. When the new owner moved the desks back into the lounge, another psychic came in and confirmed that the Head Nurse was pleased, and hasn’t made any complaints since.

In the hotel, numerous guests have reported the ghosts of children in the hallways and hotel rooms. They’ve heard giggling, laughing, and crying coming from what seem to be empty rooms. On one occasion, a guest heard a baby crying, loud enough to force him to call the front desk. When hotel security checked, the room was vacant. The ghost of one boy, in particular, seems to be the most common. He is said to be about 4 or 5 years old, and guests often see him running up and down the hallways, either laughing or crying. He’s also been seen in the hotel rooms while guests are asleep, staring at the occupants while standing at the foot of the bed.

The ghost of Claude Harvey, a hospital maintenance worker, still haunts the building. Claude died in 1935 under mysterious circumstances; his body was found pinned under the Otis elevator. Claude Harvey was presumably murdered, though there isn’t any evidence to support that claim. The elevator was inspected and was said not to be the cause of his death. No autopsy or x-ray was taken, as the United Verde Copper Company didn’t want to be held liable, nor did they want the controversy. Many say he was murdered, and his body was placed under the elevator to make it look like an accident.

Staff working the graveyard shift often see Claude Harvey’s ghost near the boiler room, usually walking up the stairs or roaming around as if still working. He appears as a shadow against the wall; nobody has seen a full apparition. His shadows have been seen in the laundry room, where staff have also heard him coughing and sneezing. When staff checks out the strange noises, they always find the laundry room vacant.

Not every ghost at the Jerome Grand is human; a spirit cat also lives in the building. Guests and staff have felt the cat brush up on their legs, and others hear it purring, meowing, and scratching at doors. Guests have had encounters where the cat snuggles up with them in bed or leaving a ghostly “imprint” where the cat was curled up a moment before. In 2008, a guest staying in Room 20 captured a clear image of the cat, sitting on a table looking at the photographer. The photo is kept at the front desk, among photos of other ghosts.

In addition to ghosts, guests and staff have reported strange experiences, such as lights and TVs switching on and off on their own. TVs and table lamps are also known to unplug on their own. Unknown cell phones and camcorders have been found dead center under the bed. Assorted items have gone flying across hotel rooms with no explanation.

Arizona is a haunted place. Its unique culture and history have left behind a myriad of ghost stories that helped shape its culture. Read about the Superstition Mountains, home to the Lost Dutchman and a spooky abandoned coal mine. Or take a tour of Yuma Territorial Prison, where attempted escapees were thrown into the Snake Pit. Don’t forget to book a room at the Hermosa Inn, where you’ll catch a glimpse of cowboy artist turned ghost Lon Megargee. You can also read about the top ten most haunted spots in Phoenix right here!

Welcome to the Jerome Grand Hotel