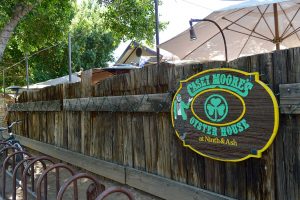 On the corner of 9th and Ash in Tempe sits Casey Moore’s Oyster House. The restaurant is often frequented by students from ASU due to its proximity to the school campus. The building was built over 100 years ago as a residence for the influential Moeur family. The Moeurs had a role in the development of the educational system in and around Tempe. The family was related to B.B. Moeur, the governor of Arizona during the Great Depression. After the Moeur family passed away, the house fell into disrepair. Sometime in the 1950s, the abandoned home became a boarding house and bordello, where local youths came to drink, do drugs, throw parties, and engage in general debauchery. There were stories of rapes, murders, and suicides. In 1973, the house was bought out and converted into a restaurant called Ninth and Ash. In 1986, it was sold and rebranded as an Irish pub and renamed Casey Moore’s Oyster House. Tempe locals know the restaurant to be haunted. Residents of the area have seen a couple dancing in the upstairs window late at night when they know the house is empty. Many presume them to be the ghosts of the Moeurs. The staff has also had silverware thrown onto the floor and tables and chairs rearranged overnight. The ghost of a young girl who was raped and murdered during the house’s bordello days also roams the restaurant.

The Moeur family was influential in the development of Tempe and the state of Arizona as a whole. William Moeur helped lay the plans for the Tempe school system and was the first head of the Maricopa County School Board. William was also on the County Board of Supervisors and was elected as the county’s first land commissioner in 1921.

Benjamin B. Moeur, better known as B.B. Moeur, moved to Arizona from Arkansas to join his family in Tempe. He was a physician and had just finished attending medical school in Little Rock. He moved in with William and Mary Moeur and began his own medical practice in Tempe. B.B. Moeur quickly gained a reputation as a “true country doctor” for his willingness to make long treks and house calls to isolated homesteads around Tempe.

B.B. was also involved in business and politics. He has a hand in power companies, ranching, hardware stores, and real estate. Like his brother, he got involved in education when he served on the Tempe School Board and the Board of Education of the Tempe Normal School. He also provided the school with his services as a physician. As time went on, B.B. Moeur became more politically engaged.

B.B. Moeur was elected the fourth governor of Arizona in 1932 during the height of the Great Depression. He got straight to work on his first day in the office and began by cutting the state’s expenditures by $4.5 million. He also implemented Arizona’s personal state income tax while cutting property taxes by 40%. He halted construction of the Parker Dam, which would have diverted Arizona’s much-needed water to Los Angeles. He then expanded assistance programs for the growing number of unemployed in the state. He died in his home in 1937, two months after leaving office.

The Moeur family home was constructed in 1910. William and his wife Mary occupied the home until their deaths. William died of a brain hemorrhage in 1929 while sitting in front of the fireplace. Mary died of natural causes in 1940 while in her upstairs bedroom.

After the deaths of the Moeurs, the house became a boarding house and bordello frequented by teenagers and young adults. They threw huge parties where they drank and did drugs. There were stories of rapes, murders, and suicides in the house. One story, in particular, involves a young woman who lived in the upstairs room. She was raped and murdered by a male friend who didn’t respond positively to his sexual advances.

The house was bought out in 1973 and was refurbished as a restaurant called Ninth and Ash. The restaurant had mild success but was then bought out again. The new restaurant was Casey Moore’s Oyster House.

Casey Moore’s Oyster House is an Irish themed pub and seafood restaurant. The restaurant enjoys some major popularity with students due to its proximity to ASU. The restaurant established its current location when it took over the Moeur house. Casey Moore’s actually existed before 1986 but was forced to move when its old location was slated for development.

Casey Moore’s has some of the best seafood in the area and even allows dogs on the patio until 5 PM, although dogs have been known to bark at some of the ghosts that reside in the restaurant.

The Ghosts of Casey Moore’s

Casey Moore’s Oyster House is famous in Tempe for its juicy burgers and oyster platters, but restaurant patrons quickly find out what else Casey Moore’s is known for. The ghosts and spirits in the restaurant are sure to make themselves known, and many have experienced the spooky apparitions and strange occurrences in and around the restaurant.

Residents across the street have reportedly seen a woman dancing through the second-floor window of the restaurant late at night. She usually appears around 4 AM, and is sometimes accompanied by a man who dances with her. On at least four different occasions, neighbors have called the police, who arrive at an empty house and untouched alarm system. Many suspect that the dancing couple are the ghosts of William and Mary Moeur, who dance the night away to the music playing in the restaurant. Longtime residents say that the couple is glad to see that their old home has been restored into a lively restaurant, prompting them to dance in celebration. Neighbors also say that the spirits of the dancing couple is accompanied by a faint glow from the second-story window.

The ghost of the young woman who was murdered has also been seen around the restaurant. Unlike the spirits of the Moeurs, she appears during business hours. Those who have seen her claim that she has dark hair and light eyes, and she appears through the corner of your eye. She stares until you turn and meet her gaze, then disappears.

The ghosts at Casey Moore’s are known to pull some strange shenanigans. Many believe that some of the spirits from the bordello like to engage in mischief from the afterlife. The staff has set the tables, chairs, and silverware before closing, only to find them rearranged in the morning. Staff and customers have also seen silverware launched from the tables on multiple occasions. Lamps have started swinging violently on their own. There’s also an account of a photo frame being launched across the restaurant, with the nail still in the wall, as if someone had lifted the picture and threw it across the room.

The unique history of Arizona and the desert southwest make it a haven for haunted hotspots. Cowboys, gunslingers, and miners all helped build the state, and their spirits never left. Learn more about the haunted history of Arizona! Make a stop at Monti’s La Casa Vieja, another haunted restaurant in Tempe. Read about the bloody Birdcage Theatre, the roughest saloon in Arizona and home to the ghost of Margarita, who had her heart carved out of her chest. You should also make a stop at the Domes of Casa Grande, where satanic cults perform blood rituals. You can also read about the top ten most haunted spots in Phoenix right here!