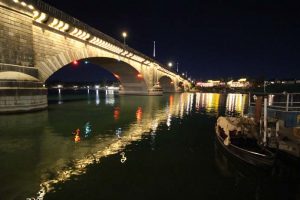 The famous London Bridge, the centerpiece of Lake Havasu City, Arizona. Somehow, the bridge that once crossed the Thames River ended up in the middle of the desert. Lake Havasu is a planned city, and founder Robert McCulloch thought that his town wouldn’t be complete without an attraction, so he bought the old London Bridge and moved it across the pond. The bridge is among the top tourist sites in Arizona, pulling in people from all over the state. Interestingly, when Robert brought the London Bridge to Arizona, he also brought over the centuries of violence and death attached to the bridge. From the Great Fires of 1212 and 1666 to the numerous drownings and accidents, to the severed heads displayed on the bridge by the Crown, Lake Havasu’s London Bridge is cursed. Drivers and pedestrians who cross the bridge might see misplaced characters from 19th century England walking along the roadway. Others have been followed home by dark energy after crossing the span. Historians say that there’s a good possibility that human remains are buried within the bridge and its granite bricks.

How did the London Bridge get to Arizona?

The London Bridge has been demolished and reconstructed numerous times, going all the way back to the beginning of the millennium. The reiteration of the bridge bought by McCulloch was built in 1871. By the 1960s, London city officials realized they needed a new London Bridge. London was growing, and the current bridge was unable to withstand the increase in vehicular and pedestrian traffic. The City of London auctioned the bridge in 1962. Robert McCulloch was the highest bidder.

Robert McCulloch, owner and founder of the McCulloch Motors Corporation, was building a dream town in the Arizona desert. McCulloch wanted to build a town of opportunity that would attract young professionals. He called the town Lake Havasu City, and he wanted a major attraction that would bring tourists. Seeing that the old London Bridge was up for auction, McCulloch bought it for $2.5 million.

Robert had it shipped to him from London. The bridge was broken down into granite bricks and shipped across the Atlantic to California via the Panama Canal. The bricks were then trucked into Lake Havasu City. The bridge was built with a reinforced steel frame to give it the necessary strength to withstand traffic.

The bridge was rebuilt exactly as it was in London, down to the brick. Almost everything on the bridge is original, including the bricks, streetlights, and railings. Engineers added tunnels for maintenance, and joints to allow the bridge to expand and contract with temperature changes.

The Bloody History of the Old London Bridge

The area of the Thames where the London Bridge spans today has had a crossing since about the year 50 C.E. The span was named the London Bridge around the year 1209, which was the first iteration of the bridge. The bridge back then supported numerous buildings, with at least 120 to 200 dwellings. This increased the fire hazard, and the load on the arches, many of which had to be rebuilt.

The London Bridge caught fire numerous times during this era. The fire of 1212 was the largest of the early fires, as the century saw many across the city. Both ends of the bridge caught fire simultaneously, trapping residents in the middle. Those who weren’t killed by the fire died when they jumped into the Thames and drowned. Rebellions in 1381 and 1450 destroyed more homes on the bridge, and the northern end of the bridge was destroyed in 1633 when it caught fire again. The Great Fire of London in 1666 destroyed the bridge further, but the fire 30 years prior created a gap that prevented the fire from spreading. The bridge again caught fire in 1725, destroying even more dwellings.

During the Tudor Era, the homes on the bridge were seven stories high and hung around 7 feet over the edge. Traffic was a nightmare. Floodwaters also became a major issue, creating havoc for boaters. Many boats were capsized, and their crews killed, while trying to navigate under the arches of the bridge. “Shooting the bridge”, as it was called, was considered an incredibly foolhardy move.

The bridge was also a place for the monarchy to set an example for those who opposed them. William Wallace was a Scottish knight who fought in the First War of Scottish Independence. His head was the first to be boiled, tarred, and displayed on a pike on the London Bridge. Over the next 300 years, countless other criminals and “enemies of the state” would have their heads cut off and stuck on a pike for all to see. Guy Fawkes and Oliver Cromwell were among them. In 1598, a German tourist claimed to see about 30 heads on display on the bridge’s front gate. The practice fell out of favor sometime in the 1700s.

The second and third iterations of the bridge were a lot less gruesome. No major incidents occurred on the second London Bridge, which stood from 1871 until 1967. Though, multiple sets of human remains, including children, were found under the bridge while it was being dismantled in the 1960s. In a process called immurement, people were buried alive under the bridge while it was being built as a ritual to ensure the bridge’s longevity. The current London Bridge, completed in 1972, was equally uneventful until the 2010s. Two terrorist attacks occurred in 2017 and 2019, taking the lives of at least eight people.

Ghosts of the London Bridge

Since its completion in 1967, the London Bridge in Lake Havasu City has been haunting residents and tourists. During the grand opening, many witnessed a group of 4 women in Victorian dress walking along the bridge. Most thought it was a publicity stunt done by the city until the women mysteriously vanished into thin air.

It’s fairly common to see characters from old London on the bridge, wearing period clothing. The apparitions usually disappear when one gets too close. One common apparition is the ghost of a woman in a black dress. She usually is seen walking quickly across the bridge, clutching her purse. Some have seen her jumping into the water at night. Interestingly enough, she never hits the water but disappears right before impact.

Some say the souls of Old London are forever trapped. The centuries of death from fires, rebellions, and drownings may be keeping numerous spirits attached to the bridge. The ghosts of criminals and England’s perceived enemies may also be wandering around, still angry about having their heads on display over the bridge’s gates.

Many have felt a force of dark energy follow them while crossing the bridge, sometimes following them home. Many sources have been proposed. One theory is of the ritual sacrifices made under the bridge while it was still in London. The bodies of women and children were buried alive under the bridge as a ritual to ensure longevity. Their ghosts and spirits may be angered that the bridge was moved or that they were buried at all. The light posts may also be a source of bad energy. The metal used to make the light posts was melted down from the cannons of Napoleon when they were confiscated after his defeat. The cannons were used to kill thousands on the battlefield, meaning that even lights on the London Bridge are stained with blood.

One of the creepier stories of the bridge are from two Lake Havasu residents who claimed to hear voices while walking home one night. A mother and son began to hear strange, angry voices encouraging them to jump off the bridge as they crossed the river. The mother was overcome with nausea, and both had an incredible sense of uneasiness and fear, which lasted for months. Other Lake Havasu City residents claim to have similar stories.

Drivers have spotted dark and ominous figures floating above them, who tend to follow as they drive across the bridge, only to leave them alone when reaching the other side. Some visitors say they’ve been bumped into by unseen entities. Workers and pedestrians have heard blood-curdling screams coming from under the bridge and within the tunnels. The tunnels are closed to everyone except maintenance personnel and engineers. The source of the screams has yet to be found.

The fascinating history of Arizona makes it a hotspot for ghosts, haunted houses, and UFO sightings. Read more about Arizona’s haunted history! The Birdcage Theatre was one of the roughest saloons in the Southwest, where daily shootouts leftover 100 bullets in the walls. The ghosts of gunslingers and prostitutes still reside there. Pioneer Village in Phoenix is a collection of original old buildings from Arizona’s settler days, and each building has its own set of spirits. The Congress Hotel in Tucson has been called one of the most haunted hotels in America and has sent startled guests running out of their rooms in the middle of the night. You can also read about the top ten most frightening places in Phoenix right here!