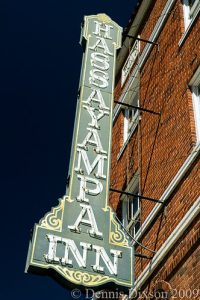 The Hassayampa Inn in Prescott was originally built for wealthy travelers looking to escape the blazing Arizona sun. The inn was built in 1927 and was the cornerstone of Downtown Prescott. It brought the community together, being the brainchild of Prescott residents who challenged an architect to build a beautiful hotel for their city. Today the hotel attracts thousands of visitors a year and is a lot less expensive than it was in the roaring 20s and 30s. It’s not uncommon to see antique cars parked in front of the hotel, which pays homage to its 90-year history. But the beautiful architecture and location in the center of Downtown Prescott aren’t what always brings guests to the Hassayampa. The hotel is also haunted. A woman named Faith Summers killed herself in the hotel shortly after it opened in 1927. Faith still haunts the hotel. Guests and staff see her wandering all over the inn, but suite 426, where she committed suicide, is by far the most haunted room in the Hassayampa. Faith is known to haunt and harass those who speak of her inside the hotel.

History of the Hassayampa Inn

In 1925, the residents of Prescott, Arizona, challenged El Paso architect Henry Trost to build a beautiful new hotel. The people wanted a place for residents to come together to dine, relax, and socialize. During construction, the Prescott residents were able to buy shares of the hotel for $1 apiece, which helped fund construction. The end result was a four-story tall, 68 room, red-brick hotel, which became the centerpiece of the city. The hotel was named for the Hassayampa River, which runs just north of town. Being a partially subterranean river, the Hassayampa river disappears into the Earth during its journey. The word “Hassayampa” actually means “the river that loses itself” in Apache. The designers thought it was a fitting name, as guests can lose themselves in the hotel.

The Hassayampa Hotel, as it was called then, served the wealthier clients who needed a place to escape the Arizona heat. Prescott’s cooler weather makes it a perfect retreat for those looking to get away from the much hotter climates of Phoenix or Tucson. The inn was designed for guests of high status, with Spanish and Italian architectural touches. The lobby is luxurious and grandiose, adorned with fine art, carved wooden arches, a fireplace, and hand-painted ceilings. Walking into the Hassayampa’s lobby is like taking a step back into 1927.

Today, the Hassayampa remains one of the busiest hotels in Prescott. It’s a popular place for weddings, banquets and business meetings. The hotel is near Prescott’s finer attractions, lying walking distance from the historic Whiskey Row, the Sharlot Hall Museum, and the Museum of the Indigenous People. A number of art galleries are nearby as well. Antique car clubs meet at the Hassayampa too, and it’s common to see their classic cars parked on Gurley street in front of the inn. The classic cars pay homage to the hotel’s 90-year history.

Suicide at the Hassayampa

Shortly after the grand opening in 1927, Faith Summers and her husband booked a room at the Hassayampa Hotel for their honeymoon. The plan was to seclude themselves and have a night of passionate romance before beginning their lives together. The couple booked the hotel’s biggest room, the Grand Balcony Suite, also known as room 426.

Before the couple began their night alone, Faith’s husband stepped out to buy a pack of cigarettes. He never returned. It’s unknown whether he met some unfortunate fate or if he just decided to disappear on his newlywed wife.

Faith waited for three days. She became more distraught and disturbed as the days went on. On the third day, the desperation got to her, and Faith hung herself. The hotel staff found her body on day four. Her body was visible to passersby on Gurley Street just below.

The Ghost of Hassayampa Inn

Faith Summers never left the Hassayampa Inn. Visitors and guests have seen her all around the building, though she most often appears in room 426. Faith is usually seen floating around the hotel, wearing a pink dress. They say that she wanders the hotel waiting on her long lost lover.

Those who see Faith around the hotel often say she appears for a short time before disappearing. Guests have seen her float through the hallways before disappearing into different rooms. Guests have been startled when Faith appears in their suites, crying at the foot of their bed while holding her bridal bouquet. One guest found Faith sobbing in the corner of their room and thought to ask her if she needed any help. Faith then disappeared into thin air. Another man claimed to feel a presence in his room as he fell asleep. He then awoke to a woman hugging him in bed.

Faith has also been seen in the Peacock, the Hassayampa’s restaurant. She likes to switch things on and off in the kitchen and the adjacent bar, including the radio, faucets, and television. Kitchen staff say that when they feel Faith’s presence in the kitchen, the stove burners go out.

Faith reportedly does not like to be spoken of, nor does she like guests reading about her story. One woman had her coffee jump out of her cup at the very mention of researching Faith’s suicide. It also happens that she was standing in front of Faith’s suite when it happened. Others have had similar experiences while researching Faith’s story, or sometimes simply even talking about her.

Room 426, the Grand Balcony Suite, was where Faith Summers committed suicide. This is the epicenter of hauntings in the Hassayampa Inn. Many feel cold spots in the room, which are usually accompanied by the scent of flowers. She apparently gives female guests foot massages while giving the male guests nightmares. She’s probably become quite bitter towards men as a whole since her abandonment and subsequent suicide.

Some of Faith’s appearances in Room 426 tend to be emotionally charged and angry. One couple was rudely awakened when their TV and radio was suddenly turned on in the middle of the night, with the volume on full blast. The lights also turned on, and they also found the bathroom faucets running. On another occasion, an employee was cleaning the hall just outside of Room 426 when she heard a loud boom and saw the wreath fly off the door to the suite. When she opened the door to check inside, she was startled to find the room empty.

Employees at the Hassayampa Inn have long come to terms with Faith Summers; they’ve accepted that she’s here to stay. Employees that are brave enough to stick it out are cautious. Some employees don’t stay in the Grand Balcony Suite, despite it being the most luxurious room in the hotel. Others can’t take the haunts. One employee recently quit three months into the job after her first encounter with Faith.

There are two other ghosts that have been seen in the Hassayampa. The ghost of a young East Asian boy, about six years old, haunts the laundry room. He tends to tug on women’s shirts as if he’s looking for his mother. There’s also a ghost known as the “Night Watchmen,” an old man dressed in Old Western clothing. He was first spotted around the Peacock Room by the kitchen manager. He wears a large brown overcoat and tends to disappear into the walls.

Arizona is a haunted place. Whether it’s the Native American spiritual sites, abandoned coal mines, or UFOs, there’s always something to see in Arizona. The state’s history gives way to some chilling ghost stories, like Yuma Territorial Prison, where the ghosts of inmates can still be heard begging for mercy in solitary confinement. The Hotel Congress in Tucson is known as one of the most haunted hotels in the country, and guests have had ghostly apparitions surround them in bed while sleeping. The Domes just outside of Casa Grande is an abandoned factory that’s plastered with graffiti, and hosts satanic cults who perform rituals to summon demons. You can also read about the top ten most haunted locations in Phoenix right here!