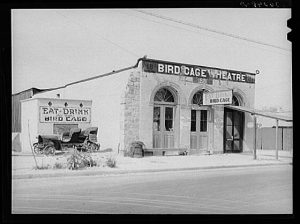 Tombstone is the town that was too tough to die. Mostly known for the gunfight at the O.K. Corral, Tombstone is also home to the infamous Birdcage Theatre. The Birdcage served to entertain the influx of silver miners in the late 1800s. The theatre hosted a variety of entertainers, had a bar, and also doubled as a brothel. Poker was also played in the basement. The Birdcage actually hosted the longest-running poker game ever recorded, lasting just over eight years. Wyatt Earp, the deputy marshal of Tombstone, frequented the Birdcage Theatre and had an affair with one of the sex workers who reserved a bordello just for him. The theatre was known for being a rough place, probably the most dangerous saloon in the Old West. In its 13 years of operation, 26 died in bar fights and shootouts. One woman even had her heart carved out of her chest. There are a number of confirmed ghosts in the Birdcage Theatre, as well as some seriously strange occurrences. Relics tend to disappear and reappear, and one medium had spirits attempt to strangle them.

Everyday life at the Birdcage Theatre

The Birdcage Theatre operated from 1881 to 1894. It was mainly in business to entertain the miners that poured into Tombstone during the silver boom. When Lottie and Billy Hutchinson first opened the Birdcage Theatre, they expected to host family-friendly content. They opened the theatre with a Ladies Night for the more respectable women of Tombstone. Their idea was a flop. The Hutchinsons had to either appeal to the miners or set up shop somewhere else. They decided to turn the theatre into a triple threat; an all in one saloon, brothel, and gambling parlor. They also had occasional masquerade balls where entertainers would sing while dressed in drag. The theatre was open 24/7, 365 days a year. Patrons were allowed to hang out and drink all night if they chose.

One of the first acts they booked was a woman known as the “Female Hercules.” Her specialty was bending iron and picking up heavy objects with her teeth. They also booked singers, dancers, comedians, and magicians. Having learned from their mistake at the first ladies night, the Hutchinsons booked anyone that was worthy of entertaining the rough crowd of redneck miners.

The Birdcage was known for its Painted Ladies. Also known as “Soiled Doves,” these women brought their clients into private boxes suspended from the ceiling, where they would entertain them. Some would say that they were “vertically employed.” These women gave the Birdcage Theatre its name. Musician Arthur Lamb said the painted ladies’ revealing clothing reminded him of songbirds and thought the balcony box bordellos reminded him of birdcages. He went on to compose “She’s only a bird in a gilded cage” on-site at the theatre. Though the Painted Ladies were revered and legendary while inside the Birdcage, they were looked down upon and ostracized on the outside.

There were some rough-and-tumble times at the Birdcage. Bar fights, shootouts, stabbings, suicides, you name it, and it probably went down at the theatre. Feuding gangs would often end up there at the end of the day, and after a few drinks, all hell would break loose. Fatima, the famous painting of a young dancer in the theatre lobby, still has six bullet holes, a reminder of how commonplace the violence was. Around the entire theatre, about 120 bullet holes riddle the walls of the establishment.

The most gruesome murder at the Birdcage was due to a feud between one of the Painted Ladies and a madame at Crystal Palace, a rival brothel. Margarita was known as the “Belle of the Birdcage,” and Little Gertie the Gold Dollar was her rival at Crystal Palace. Billy Milgreen was one of Little Gertie’s regulars, as well as her live-in lover. Margarita wasn’t afraid of Little Gertie, vastly underestimating her ruthlessness because of her petite size. She caught Billy and Margarita fraternizing in the Birdcage, thinking that Margarita was trying to steal her man, she attacked. Little Gertie the Gold Dollar grabbed a double-edged stiletto that she had stashed and began hacking at Margarita’s corset, hacking at her heart and eventually chiseling it out of her chest. She left after the murder, making her escape as soon as the marshals arrived.

Like Tombstone, the Birdcage Theatre was a boom-and-bust. The miners hit the water in the silver mines, and the remaining silver was submerged. Limited by the technology of their day, the mines closed, and the workers left for better pastures. The economy in Tombstone dried up, and the Birdcage, like many other businesses, closed its doors in 1892.

It was used intermittently in the coming years. Remaining Tombstone residents began a festival called Helldorado in 1929 to commemorate the 15th anniversary of the founding of Tombstone, which continues to this day. The Birdcage was reopened for the first Helldorado and every other thereafter. In 1934, the Birdcage was leased as a coffee shop.

The Birdcage Theatre is now open as a museum and local attraction. Everything inside is intact, standing exactly as it was during the theatre’s heyday.

The basement of the Birdcage Theatre was a gambling parlor, and hosted one of the longest-running poker games in history. From 1881 to 1889, the game went on continuously for about 8 ½ years. The buy-in was $1000 upfront, which translates to about $27,000 today. Seven high-stakes gamblers would play at a time, and notable figures got in on the game, including Wyatt Earp, Doc Holliday, and George Hearst. It’s estimated that about $10 million was exchanged during the course of the whole game, and the Birdcage retained 10% of that money. The game stopped when the Birdcage finally closed its doors.

Ghosts of the Birdcage Theatre

Though the Birdcage closed over 100 years ago, the party never stopped. The theatre is home to a number of ghosts that don’t want to leave their old life behind.  Visitors have seen the ghosts of cowboys, gamblers, prostitutes, and gunslingers. Though there’s no smoking in the museum, some can smell cigars still burning. The piano has been known to strike a few chords when nobody’s on it. Some hear laughter from the brothels when they’re empty, and shadowy stagehands have been seen walking along the stage.

The ghost of the slain Margarita still haunts the Birdcage. She is usually seen on stage, and one woman has seen Margarita naked behind the curtain, claiming that the theatre was empty as she looked off into the distance. The stiletto that Little Gertie the Golden Dollar used to cut out her heart was recently found in the theatre, so it is probable that Margarita’s spirit is still attached to the murder weapon.

The ghost many seem to encounter is the ghost of the “Lady in White”. She usually wears a white dress and bonnet and has been seen by just about everyone who has worked at the museum. She seems to be a woman of status, seemingly out of place in a rough place like The Birdcage. One employee encountered her in the poker room when she entered through the stairwell and stood in front of the employee for a while, not reacting to her presence. Many others report similar experiences, where the Lady in White doesn’t acknowledge the presence of others. Despite being the most commonly seen ghost in the theatre, no one knows who she is.

There is one ghost who is bound to the theatre, although she lurks outside. Carmelita Gimenes, one of the brothel’s Painted Ladies, poisoned herself with arsenic in 1888. She was found throwing up by her boyfriend after he came home from work. Her boyfriend and cousin took her in for medical treatment, but the doctors couldn’t save her. She died the next day. The Birdcage Theatre closed its doors that day in her honor. The crying ghost of Carmelita Gimenes can be seen wandering around Tombstone at night, hanging around the brothel that drove her to commit suicide.

Two prominent mediums conducted a seance at the Birdcage in the 1980s, as they suspected there to be evil or mischievous spirits lurking about. Midway through the seance, a spirit began to strangle one of the mediums, only stopping when the other medium broke her trance. The medium was left with bruises on his neck for six weeks.

Learn more about the haunted history of Arizona!

Arizona has a haunted past. The ghosts of gunslingers, coal miners, and cowboys are all still alive and kicking in the desert southwest. You can learn about the Superstition Mountains, home to the spooky Lost Dutchman’s mine. Or you can book a room at the Hotel San Carlos in Phoenix, where a grisly suicide cursed the hotel right after the grand opening. You can also read about the top ten most haunted spots in Phoenix right here!