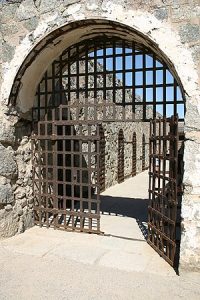 Criminals who were apprehended in the early days of the Arizona Territory probably spent some time in Yuma Territorial Prison. The prison operated from 1876 to 1909, and just over 3,000 inmates passed through its iron gates. Though the prison was coed, only 29 of the inmates were women. Like any prison, life was tough. But for inmates at Yuma, the desert heat, stone walls, and massive watchtower created a hellish environment fit for hardened criminals. Outlaws from all over the West feared having to go to Yuma. From suicides, to prison riots, and attempted escapes, Yuma has seen it all. While the prison is now Yuma Territorial Prison State Historic Park, the ghosts of the prisoners live on. Visitors often hear blood-curdling screams and pleas for help, rattling chains, and the occasional echoes of music from the Yuma Prison Band. It seems that many of the criminals at Yuma never found freedom, and their spirits were forever doomed to be locked up in the roughest prison of the Old West.

Yuma Territorial Prison wasn’t in operation for very long, being open for only 33 years, but it was loathed nonetheless. The prison was authorized by the legislature in 1875. It was built by prison laborers, many of which spent time there once it opened in 1876. Seven prisoners walked into Yuma Territorial on opening day.

In 1882, the infamous watchtower was constructed, giving prison authorities a full view of the inmates. A year later, F.S. Ingalls took over as warden and made some major changes to Yuma Territorial. He built a small building that housed an engine room, a blacksmith, a carpenter, a tailor and a shoe shop. He and his wife, Madora Ingalls, helped to upgrade the quality of life for the prisoners. F.S. Ingalls switched the prison over to electricity, building one of the first generators in the West in 1884. Madora brought educational opportunities to the prison and helped set up the library, which was the only library in town. Ingalls’s tenure was followed by Thomas Gates, whose administration brought a policy of “firm but fair” punishment.

A riot broke out in 1886 when seven inmates tried to escape. After seizing firearms from the guards, they took Warden Thomas Gates hostage and used him as a human shield as they charged the front gates. Gates, unphased, told his guards to shoot and not worry if he gets hit. The guards began to shoot, and one inmate stabbed the warden in the back. A trustee then stole the warden’s handgun and shot the attacker dead. The riot was later named the Gates Riot, after the warden. At least four inmates were shot dead by guards, and one was wounded.

By the early 1900s, the prison had become overcrowded, and work began on building a new prison. Florence Prison was completed in 1909, and authorities began moving prisoners upon its completion.

Yuma Union High School occupied the building between 1910 and 1914. When the school played against Phoenix and won in a huge upset, they were taunted by the opposing team, who called them “criminals.” The students took the name with pride, and to this day, use the criminal as their mascot.

After becoming a squat for vagrants and their families during the great depression, Yuma Territorial Prison stayed unused until the 1940s. During WWII, the prison guard tower was used for spotting. The prison also operated as a museum up until the 60s. In 1961, Yuma Territorial became the 3rd state park in Arizona and remains a popular attraction in the area to this day.

Life at Yuma Territorial Prison was harsh. The prison was open-air, exposing inmates to the bare heat of the desert. They also had the Arizona wildlife contend with; snakes, spiders, and scorpions often wandered into prison cells. The prison was once of the most feared and hated prisons in the West. But despite what outlaws and criminals thought of the place, the reality was quite different.

Yuma Territorial was considered a model prison as far as living conditions went. Inmates had electricity, ventilation, a hospital, a 2000 book library, literacy classes, and a prison band. Locals began to call the prison “The Country Club on the Colorado.” From their perspective, criminals were living better than they were. The average home in Yuma was nowhere near as luxurious as the prison. Inmates also hardly served their time in full. The prison administration was very lax and would hand out parole hearings like candy.

Even as far as punishments went, they were relatively humane. Given that it was the late 1800s, the penalty was still quite rough by modern standards. Standard punishment was getting thrown into the Dark Room wearing nothing but your underwear. The Dark Room was a 10 square foot room with only a tiny vent for daylight. After sundown, the prisoner was in complete darkness. They would get one meal of old bread and water a day. If the inmate was an attempted escapee, they would get the added bonus of a ball and chain locked to each ankle. The Dark Room was also known as the “Snake Den”, as snakes and scorpions would find their way in. Whether they came in through the ventilation shaft or were tossed in by a sadistic guard will never be known.

Out of the 3,069 prisoners that passed through Yuma Territorial, 111 died in the prison walls. Most inmates died from tuberculosis, which was ravaging the country at the time. Grand larceny was the most common crime among the inmates, as were murder and polygamy. At the time, the federal government was cracking down on polygamists, so a disproportionately high number of inmates were Mormons from nearby Utah.

Yuma had quite a few notable inmates. Mexican anarchist and revolutionary Richard Flores Magon was sentenced to 18 months at Yuma for violating neutrality laws after planning the takeover of a mine. His followers fought with Pancho Villa during the Mexican Revolution. Pearl Hart, also known as the “Bandit Queen,” was sentenced to 5 years after robbing a stagecoach, having committed one of the last known train robberies of the Old West. She used her feminine charm to serve only two years of her sentence.

Many of the prisoners at Yuma Territorial Prison never got their freedom, even in death. Ghosts and paranormal occurrences are common at Yuma. Both staff and guests have been haunted by the inmates who still occupy their jail cells. While ghosts appear all over the old prison, the main cell block and the Dark Room seem to have the most activity. Though, the jail cells are known to be quite haunted as well. Visitors report feeling a sense of dread and uneasiness upon entering the jail cells. Some even hear the faint voices of the inmates.

Visitors and staff have heard blood-curdling screams and cries for mercy. They assume that it’s the ghosts of those sent to punishment in the Dark Room. Rattling chains are also a familiar noise, probably from the ball and chain that was used to punish attempted escapees. Some have even heard the faint sound of music, memories leftover from the Yuma Prison Band.

The Dark Room is the most haunted part of the prison. It’s open for visitors to enter. Most who do enter immediately get a sense of being watched, as if they’re not alone in the room. Staff says that the ghost of a small girl inhabits the Dark Room. She pokes, prods, and pinches visitors with her cold fingers. She may be one of the children of the many homeless families who lived in Yuma Territorial during the Great Depression.

A staff writer from the Arizona Highways magazine attempted to stay in the Dark Room for 48 hours to recreate the full prisoner experience. She was shackled to the ringbolt with a jug of water and a loaf of bread. She only made it 37 hours after insisting that she wasn’t the only one in the room.

Cell 14 was the cell where John Ryan was held. Ryan was incarcerated for “crimes against nature,” meaning he committed a sexual offense, most likely rape. Both the guards and prisoners hated him, and he ended up committing suicide in his cell. Visitors who walk by Cell 14 report feeling cold spots, chills, and shivering.

A few other ghosts are quite well known to staff. The spirit of a female inmate sings in the visitors’ area in the morning. A ghost named Johnny lives in the gift shop, and he likes to rearrange the coins in the cash drawer, though he leaves the bills alone.

Yuma Territorial Prison was where the worst outlaws of the Old West were sent to serve their time. Arizona’s settler days were chock full of train robbers, cowboys, coal miners, and Mexican revolutionaries. They left behind a bloody, haunted history that shaped Arizona’s culture. Learn more about the haunted history of Arizona! Check out Pioneer Village in Phoenix to get a taste of small-town life in the Old West. Almost every building in the village has its own ghost. Or book a room at the Hotel Congress in Tucson, one of America’s most haunted hotels. You can also read about the top ten most haunted spots in Phoenix right here!