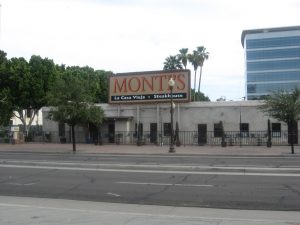 The Haydens were a highly influential family both politically and economically in Arizona. C.T. Hayden laid down the foundation for the city of Tempe when his train got stuck in the floodwaters between Tucson and Prescott. Believing the area to be an excellent place for a settlement, C.T. Hayden claimed some land on the south bank of the Salt River, and built a cable ferry, flour mill, general store, and a few other businesses.

As Tempe grew, so did Hayden’s influence. President Grover Cleveland encouraged Hayden to run for governor of Arizona, which then was a territory. Though he lost, he continued to be involved in politics. His former employee succeeded in getting elected to the Arizona Territorial Legislature. Being married to a schoolteacher, Hayden thought the territory needed more education. Whereas the legislature wanted to bring a lucrative insane asylum to the territory, Hayden lobbied for a school. The Territorial Normal School later became Arizona State University.

C.T. Hayden’s wife was suffragist and schoolteacher Sallie Davis. Born in Arkansas, she was teaching in California when she met Hayden. Like her husband, Sallie took on a significant role in local Arizona politics. Along with Josephine Brawley Hughes and Frances Willard Munds, Sallie helped create the suffragist movement in Arizona, often hosting suffragist speakers at her home.

C.T. Hayden and Sallie had four children. Among them was Carl Hayden, one of Arizona’s most renowned senators. In addition to being Arizona’s first representative, he also set the record for the longest-running member of the senate, being the first to serve seven terms. To this day, Carl Hayden’s still hold the record for the third longest serving member of Congress.

Hayden’s tenure in Congress helped push development in the West. The Federal Highway System was partially his creation. Hayden also pushed to bring power, irrigation, and land reclamation to raise quality of life in the western states.

Hayden was known for being a quiet “work-horse.” Despite being one of the longest-running Congress members, he often went years without making a speech, on one occasion going over 20 years without speaking on the floor of the house. Instead, Hayden preferred to make his mark by actions and outreach.

The Hayden family made several upgrades to the home after the original build. The house initially had thirteen rooms, and two more were later added in 1876. They then added six more rooms and a second story that consisted of two rooms.

The Hayden family resided in the home until 1889 and began referring to the house as “La Casa Vieja.” They ran La Casa Vieja as a boarding house up until 1924 when Sallie and Mary Hayden decided to open a restaurant. The Haydens sold the restaurant in 1930, and it passed through numerous hands until being bought by Leonard Monti in 1954.

Leonard Monti took the restaurant to another level. He named the place Monti’s La Casa Vieja, a reference to the Hayden’s nickname for the house. He reopened the restaurant in 1956, two years after he bought it. Monti decorated the restaurant with photos and artifacts which represents the area’s history, making it a landmark for those passing through.

The restaurant quickly gained a reputation for its steak and delicious rosemary-baked bread. Their world-famous Monti burger was a hit as well. They had specials for ASU football games that attracted large crowds. Over the years, Monti’s became a fixture in Tempe.

Monti’s added new rooms during the ’60s and ’70s, both for dining and office space. This gave the already unusually designed restaurant an even more confusing layout. Monti’s became like a labyrinth, which contributed to its haunted atmosphere.

In November of 2014, Monti sold and closed the famous steakhouse, citing the rising cost of beef and encroaching development. After auctioning off the historical memorabilia, the restaurant was cleaned out and sold to local developers. Luckily, the development isn’t going to destroy the historic Hayden House but preserve it. Parts of the house added in the ’60s as offices were torn down, and the original building is being preserved. The Hayden House will be sold back to the city of Tempe upon completion of the restoration. No word on what’s next for the Hayden House.

While also a world-famous steakhouse, Monti’s was also quite haunted. Well known amongst Tempe area locals, many came here not just for steaks and burgers but also to see ghosts. The restaurant’s maze-like structure contributed to its ghostly atmosphere, as patrons found it easy to get lost. Patrons have had their cutlery disappear and get thrown off tables, and many would feel random cold spots or feel a chill down the back of their neck while walking down certain hallways.

The many different rooms in the restaurant all had different names and each with its own ghostly ambiance. The Mural Room had a giant mural, and Patrons often reported seeing an old cowboy hanging out there. The cowboy was said to be friendly, but he was known to pull random disappearing acts. Diablo Way was a dark and spooky hallway that seemed to absorb sound.

The Hayden Room is where Carl Hayden was said to be born. The sign posted in the Hayden Room is somewhat inaccurate; Carl was actually born in a smaller, more secluded room beyond the Hayden Room. The dimly lit and spooky atmosphere gave many patrons the creeps. Some have said they can still feel Hayden’s mother struggling to give birth. Others say they simply feel a “weird” feeling upon entering the room, often without knowing about Hayden’s birth.

Staff often refused to clean the Fountain Room if it was especially spooky on any given day. After hours, the room gets even creepier. Staff claimed they heard laughter and conversations, and typical sounds from the restaurant as if it were still open.

Even after the closure of the building in 2014, it remained haunted. Urban explorers and ghost hunters often wandered into the building. The cowboy ghost still hangs out, and the fountain in the Fountain Room still echoes with the eerie sounds of disembodied children. Most who explored the abandoned La Casa Vieja said the same thing; though it was empty, it still sounded like a restaurant. They heard the sound of cutlery scraping against the dishes, laughter, conversations, almost as if the restaurant never closed.

The desert southwest is a place of mystery. Abandoned mines, ghost towns, outlaws; you can find it all. Why not read more about the haunted history of Arizona. Book a room at the Hotel San Carlos, where a suicide after the grand opening forever cursed future guests. Or explore the Superstition Mountains and search for the Lost Dutchman. You should also catch a show at the historic Orpheum Theatre and give their resident ghost, Maddie, a visit. You can also read about the most haunted places in Phoenix right here!

The night we said goodbye to Monti’s La Casa Vieja