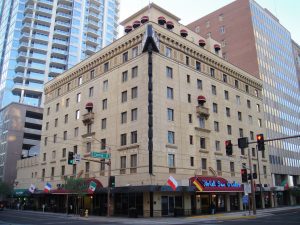 The Hotel San Carlos in Downtown Phoenix is among the oldest surviving hotels in the city. It’s the only remaining establishment in Phoenix from the roaring twenties. Upon its completion in 1928, it was one of the most upscale hotels in the Southwest, complete with elevators and air conditioning. The Hotel San Carlos later became a stop for some of the biggest name celebrities of its day, like Marilyn Monroe and Gene Autry, to name a few. The Hotel San Carlos is also very haunted. A woman named Leone Jensen committed suicide at the hotel only a few months after the grand opening. Her ghost still haunts the hotel to this day. The Hotel San Carlos was built on the site of a former school, and guests have seen the spirits of children running through the halls at night.

The land where the Hotel San Carlos now sits was originally a Native American worshiping grounds. In 1874, a small adobe elementary school was built for the local children. The school existed up until 1919 when the land was bought by the Babbitt family, who planned to build a luxury hotel, the Hotel San Carlos.

History of the Hotel San Carlos

Construction began in 1927 after the Babbitt family sold the land to two local developers, Charles Harris and Dwight Heard. Upon its completion in 1929, the Hotel San Carlos was the most luxurious hotel in Phoenix, and arguably the Southwest. The hotel was the first building in Phoenix with air conditioning and the first high-rise in the city with elevators. The hotel also had running chilled water and steam heaters in the rooms.

The hotel had its grand opening on March 19th, 1928. In May of 1928, Leone Jensen killed herself by jumping from the seventh story of the hotel. The Arizona Republic reported the story, with the headline “Pretty blonde jumps from San Carlos early today.” The ensuing publicity gave the Hotel San Carlos some notoriety, as now legends of the haunted hotel made rounds across the country. The hotel has an informative area for Leone set aside on the third floor, where she had booked her room, with pictures and newspaper clippings telling her story.

In 1929, Dwight Heard passed away, giving Charles Harris complete ownership of the Hotel San Carlos. Harris moved his family into the top floor penthouse and took over the hotel’s affairs. During the Great Depression, Harris worked day and night to keep the hotel afloat. Harris’ widow sold the hotel to an investment group in 1967. The investors were unable to financially gain from the hotel, so they sold the building to Gregory Melikian in 1970. Gregory and his family have been running the hotel since. They’ve made some upgrades to the building restoring the property to its former glory. The Melikian family has restored and revitalized many other historic properties in the downtown Phoenix area. The Hotel San Carlos was added to the National Register of Historic Places in 1983.

The Hotel San Carlos is today known for its vintage architecture and original room fixtures, giving guests an ambience reminiscent of the mid 20th century. The hotel was built in Italian Renaissance style, which is visible on the exterior of the building as well as the lobby. The hotel retains much of its antique style. The rooms still have the original furniture, including the steam heaters, considered a luxury in the early days of the hotel. The Hotel San Marcos also has amenities, such as a gym, pool, and live bands, that continue to attract guests. Despite its historic status, vintage architecture, amenities, and prime location in Downtown Phoenix, the Hotel San Carlos is surprisingly cheap.

During its heyday, the Hotel San Carlos was a crash pad for big-time celebrities. Mae West stayed at the hotel in 1929 when she performed at the Orpheum Theatre. Clark Gable and Carole Lombard often had romantic getaways at the Hotel San Marcos. Marilyn Monroe was also a frequent guest. She would usually book a room on the third floor, where she could remain unnoticed and hang out by the pool. Other notable celebrity guests include Humphrey Bogart, Gene Autry, Spencer Tracy, and various governors and senators. In honor of their most well known guests, the largest and most luxurious suites are named after the celebrities who were known to frequent the hotel.

Ghosts of the Hotel San Carlos

The Hotel San Carlos has been haunted from the very beginning. Only two months after the grand opening, Leone Jensen jumped to her death from the seventh floor. Why she committed suicide has been a subject of debate. Some say she was abused by her lover. Others say she had a debilitating illness that caused her to be in constant pain. Leone may have also been pregnant at the time and having an affair with a hotel worker.  Due to the many possibilities behind her suicide, a murder may seem more plausible. Some speculate whether or not her boyfriend or jealous mistress may have been the one to push her off the edge. Whatever her reason, Ms. Jensen decided to end her life at the Hotel San Carlos, forever creating a legacy.

The ghost of Leone Jensen appears as a wispy white apparition to those lucky enough to see her. Leone often appears on the staircase of the seventh floor, as if still walking towards her death. She’s also been seen walking up and down the third floor’s hallways, where she checked out a room before her apparent suicide. Some guests have even seen her standing at the foot of their bed, staring at them as they sleep, before disappearing into thin air.

Leone wasn’t the only suicide at the Hotel San Carlos. Another young woman attempted suicide at the hotel in 1948, though she was saved by the frame of an open window, catching her and preventing her death. In 2004, a man jumped to his death from the roof of the hotel.

Some of the other ghosts in the hotel are children, and so it’s believed that they may be tied to the school that existed before the hotel was built. A group of young boys is often seen in the hallways playing ball and making noise. When guests come out to quiet them down, they disappear. Other guests have heard the sound of the ball bouncing up and down the hallway. Some guests also report hearing children’s voices coming from the halls and basement in the middle of the night, only to find nobody there when they look. There is also a ghostly young girl who visits hotel rooms, only to sit in the corner and cry.

Many believe that these children are victims of the Spanish Flu pandemic, which swept the world in 1918, just before the school closed.

Other strange occurrences are known to happen around the building. Many guests have said they’ve heard an unknown man moaning in the halls of a hotel. The staff has also had calls come in from extensions that don’t exist.

The land that the hotel sits on was originally a Native American worshiping site, where they went to pray to their gods. This could very well be a reason behind why the hotel seems cursed.

Learn more about the haunted history of Phoenix!

Phoenix is a historic city, and history brings ghosts! Don’t be afraid to learn more about the haunted history of Phoenix. Read about the Hermosa Inn, and cowboy artist Lon Megargee, who’s ghost never left his art studio turned luxury resort. Go back in time to the historic Rosson House, haunted by a murdered museum caretaker. Or take a trip down to Tucson and book a room at the Hotel Congress, a haunted hotel that also served as a hideout for John Dillinger and his gang of outlaws. You can also learn about the most haunted spots in Phoenix right here!