The Hermosa Inn & the Ghost of Lon Megargee 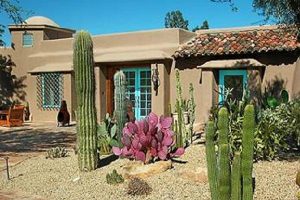 Located in the affluent Paradise Valley, the Hermosa Inn is one of the region’s highest-rated hotels. The Phoenix suburb is known for its many hotel resorts and million-dollar mansions, and the city is one of the wealthiest in Arizona. But what makes the Hermosa Inn different from the other luxury hotels in Paradise Valley? For one, it’s got a fascinating history. Built by cowboy artist Alonzo “Lon” Megargee in 1935, the ‘Casa Hermosa’ served as Lon’s home, personal art house, and gambling den. He even built secret tunnels to escape the law when they tried to bust his illegal gambling parties. Today, the Hermosa Inn is built around Lon’s former home and art studio. The original building is now a restaurant, affectionately named Lon’s. The ghost of Alonzo Megraree still haunts the Hermosa Inn. Guests and staff have seen Lon’s tall, skinny silhouette wearing a cowboy hat. They say that he likes to break glasses and beer bottles late at night. Lon also likes to flush toilets around the hotel randomly.

Who was Lon Megargee?

Before becoming the famous cowboy artist of the Southwest, Alonzo Megargee III was a Philadelphia schoolboy from a wealthy Scottish family. His mother was Cuban, who Lon’s father met while adventuring throughout Latin America. Lon’s father was always traveling, but he shaped Lon’s artistic spirit by taking him out to operas, art galleries, and museums while he was around. Like his father, Lon became adventurous. While still a young boy, Lon built a small log cabin in the woods near his home. Long before the Hermosa Inn, Lon was already a builder.

Lon hated school. Instead of studying, he drew lifelike caricatures of Native Americans, working maids, and forest animals. His schoolwork was suffering due to his preoccupation with his artwork. Lon faked his report cards to please his father, who eventually found out. His father sent him to a private boarding school as punishment. Alonzo rebelled by breaking the rules; his final goal was to be expelled. The school finally ejected Lon when he and a friend tied a janitor to a post board. Afterward, no other school would take Lon; he’d been branded as a troublemaker.

When Alonzo was 13, his father was killed by his mother’s jealous husband. His mother disappeared as well. Though distraught by his father’s death, Lon took his newfound freedom as a chance to fulfill his dreams. He wanted to be a cowboy. Lon went to Phoenix to live with his relatives. He worked his uncle’s ranch as a teenager, learning the ins and outs of riding horses and herding cattle. Eventually, Lon found his uncle too authoritative and set out to leave on his own. He bought a saddle and untrained horse from a neighbor for $10. On his way out of town, Lon was thrown from the horse three times.

Lon’s work ethic and passion for the natural beauty of the Southwest made him a successful cowboy. He had some stories to tell, from dodging charging steeds to almost falling off cliffs. He even trained a colt with a broken and bound arm. His hard work kept him employed. Other local cowboys took Lon under his wing, teaching him to rope, shoot, and negotiate deals.

By the time Lon was 26, he was considered a ‘champion bronc buster’ and had already owned his prosperous ranch, Rancho 51. After a devastating drought in 1909, he sold the Rancho 51 and took up art. He traveled to Los Angeles and studied art with his cousin C.F. Borton. His art reflected the Arizona landscape’s natural beauty, and Lon’s work dazzled city-dwellers with its rich color and deep textures.

Upon returning to Arizona, Lon struck up a relationship with Arizona’s first governor, George W.P. Hunt. Governor Hunt eventually commissioned 15 murals for the state of Arizona. The massive murals were displayed in the Arizona State Capitol Building and the Panama-Pacific International Exposition in San Francisco. The project catapulted Lon Megargee’s career as a successful artist. Lon traveled to Mexico, Spain, France, and Tahiti to paint and learn from the locals. He also learned about architecture, and picked up techniques that would later be used to design the Hermosa Inn.

Lon Megargee returned to Arizona and decided to try his hand at building his own home. Without any blueprints or formal plans, he began building what would later become the Hermosa Inn. Lon used the architectural techniques he learned while traveling abroad, taking mostly from Spaniard home building techniques. He used adobe bricks to build his home, with 30-inch foundations and massive walls. He used beams from an abandoned gold mine and poured a mix of oil and ash on the exterior walls to achieve the rusty rose color, which matched the surrounding soil. He built beehive fireplaces with ten-foot-wide chimneys and added an indoor patio. Lon called it La Casa Hermosa.

In the Spanish style of building, he added rooms as his family, and social circle grew. When he wanted to add a room, he used a stick to draw lines in the sand and told his workers to start building. Lon’s last wife said that as La Casa Hermosa kept growing, Lon decided to make it a guest ranch. He hosted lively drinking and gambling parties. The law caught on to his wild shenanigans, so Lon built tunnels underneath the ranch as an escape for him, and his guests, should the authorities decide to show up.

In 1941, after a nasty divorce, Lon was strapped for cash. He was forced to sell his prized home and furnishings, along with his artwork. The next owners continued the guest ranch and added amenities to make La Casa Hermosa more appealing, such as a pool, tennis court, and more casitas. In 1987, the building was severely damaged by a fire.

Jennifer and Fred Unger purchased the inn in 1992. They renovated and restored the buildings while keeping the original Southwestern charm created by Lon Megargee. They reopened in 1994, under the name Hermosa Inn. Alonzo’s original art studio was converted into a restaurant, aptly named Lon’s at Hermosa. The restaurant is decorated with Lon’s original paintings and prints, and even a few Lon Megargee photographs.

The Hermosa Inn now has 34 rooms, split between smaller casitas and the larger deluxe ranchos. The inn is nothing short of luxury, with flat-screen TVs, WiFi, valet parking, spas, and nearby golf courses. Several art galleries and upscale retailers are nearby as well.

The Ghost of Lon Megargee

In January of 1960, 77-year-old Alonzo Megargee ran his truck off the road and hiked a great distance in an attempt to get help. He didn’t make it. Lon loved his home. He built it by hand, and it was where he created some of his greatest works. He loved La Casa Hermosa so much that he moved right back in after he died. His ghost seems to hang out in the restaurant that was once his art studio. Patrons and staff of Lon’s at Hermosa have claimed to see the shadow and silhouette of Lon Megargee around the restaurant. They say he’s a tall, lanky figure wearing a cowboy hat.

Lon’s ghost is blamed for random happenings in the kitchen at Lon’s at Hermosa, such as glasses and beer bottles falling off the bar and pots and pans falling off the shelves. He once tossed a bottle of Tequila off the bar. Though these are the most common occurrences, things get even stranger. A maid quit after she claimed to see a man in a cowboy hat standing in the mirror, who disappeared when she turned around. Others have seen a mysterious woman in a pink dress strolling around the outdoor patio, presumably the ghost of one of Lon’s many mistresses.

According to staff and guests, he’s also behind many of the toilets at the Hermosa Inn flushing by themselves.

Lon Megargee was passionate about the natural beauty of his home state. The daily life of a cowboy in the Southwest was the subject of his artwork, but Arizona can also be quite a spooky place. Learn about the mysterious Superstition Mountains, home to a haunted abandoned gold mine. Or read about the infamous Hotel Congress, one of America’s most haunted hotels. And don’t forget to catch a show at the Orpheum Theatre in Phoenix, where you might meet Maddie, their resident ghost. You can also read about the top ten most haunted spots in Phoenix right here!