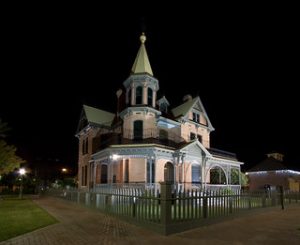 The Rosson House is one of Phoenix’s architectural wonders and one of the oldest surviving houses in the city. Built in 1895 for the influential Rosson family, the house has withstood the test of time, having been occupied by multiple owners and renters before being bought by the city of Phoenix in 1974. The city turned the house into a museum, which is now part of Heritage Square, a living memoir of the city’s Victorian past. To this day, the Rosson House is one of the most famous historic homes in the city. The house has reportedly been haunted since the 1980s, when the museum caretaker was shot dead on the house grounds. Visitors have seen unusual shadows and phantom sightings, and staff have had doors lock and unlock on their own. It’s also common to feel a phantom heat from the unused fireplace. The Rosson House was built in the Queen Anne style of Victorian architecture, giving it a typical ‘haunted house’ appearance. Houses built in the Queen Anne style are often used as models for artists drawing a haunted house.

Dr. Roland Rosson moved to the Arizona Territory in 1875 as an assistant surgeon with the U.S. Army. After leaving the Army in 1879, he married his wife, Flora Murray. The two had seven children, though two died in infancy. In 1882, the couple purchased Block 14 of the original Phoenix townsite, which would soon become the site of the iconic Rosson House. Before the building of the house, the Rossons lived in a smaller adobe house on the Block 14 property.

Upon its completion in 1895, the Victorian-style mansion was one of the most luxurious in Phoenix. It came complete with electric lights, hot and cold running water, an indoor upstairs restroom, and a telephone, luxuries that were rare at the time. The Rosson House even had a speaking tube that allowed communication between all three floors. Despite being built in the Victorian style, architects included a French-style tower, Italian window ornaments, and an Asian inspired moon gate. Other houses in northeast Phoenix were just as luxurious, having been outfitted with similar amenities.

Rosson had been curating his career in politics for over a decade. He ran for mayor in 1882 under a Democratic ticket, but lost. Two years later he was elected Maricopa County coroner and public administrator in 1884. In 1890 he was elected county treasurer and won a second term in 1892. That same year, Rosson attempted, and failed, to get the Democratic nomination for sheriff. Just as his home was being completed in 1895, Dr. Rosson was elected the 11th mayor of Phoenix. His tenure was short-lived. His job was tough, being a Democratic mayor with 4 Republican councilman. Due to conflicts with his councilmen, he resigned in 1896 before the end of his term. Rosson remained in the Phoenix political scene, though he took on less essential roles in public affairs.

Between 1895 and 1897, the Rossons rented their home to Whitelaw Reid. Reid was the editor of the New York Tribune, and was later appointed as the U.S. ambassador to both France and Britain. He was also chosen as the vice presidential candidate for the Republican party in the 1892 election. Reid had a lung condition, and traveled to Phoenix on doctor’s orders for an open-air treatment. Reid ran the New York Tribune from Phoenix, doing his writing and editing from the Rosson House.

Dr. Rosson and his family sold the Rosson House in 1897 and moved to Los Angeles. Not much is known about what happened to the Rossons thereafter or why they moved in the first place. Dr. Rosson died in LA in 1898 after having been ill for several weeks with gastroenteritis. Many believe his death may have actually been a suicide, as he took out several life insurance policies shortly before his death. Flora died a few years later in 1911.

Other Owners of the Rosson House

Aaron and Carrie Goldberg, an influential Jewish couple in Phoenix, bought the house from the Rossons in 1897. Aaron was an entrepreneur and politician. He co-owned a clothing store and wrote the bill that named Phoenix as Arizona’s capital.

The Goldbergs sold the house to the Higley family in 1904. S.W. Higley was a railroad builder and landowner and later became a partner of the Arizona Republican newspaper. The Higleys lived in the Rosson House until 1914.

In 1971, the Rosson House was added to the National Register of Historic Places. The city of Phoenix bought the house in 1974 in an effort to save the historic home from being razed as part of the Phoenix Convention Center redevelopment project. The city converted the house to a museum and the house was restored to its original condition. The house is now furnished as it was during the late 19th century. Heritage Square opened 6 years later in 1980, with the Rosson House as its centerpiece. Heritage Square showcases Victorian-era Phoenix as it existed in the late 1800s. The Rosson House Museum offers guided tours for just $7.50.

Ghosts and Strange Happenings in the Rosson House

In the early 1980s, one of the museum’s caretakers was shot dead just outside of the Rosson House. The place hasn’t been the same since. The murdered caretaker now haunts the Rosson House Museum, and he’s appeared to both employees and guests alike. Visitors on tour might catch a silhouette or shadow out of the corner of their eye, and some have been lucky enough to see a full apparition. Quite a few have stated that the ghost hangs out around the staircase, as many have heard phantom footsteps walking up the steps. Others have seen a shadow dart up or down the stairs, often from the corner of their eye.

The ghost of the caretaker can be said to be a bit mischievous. Employees have had doors lock on their own, and items around the museum have been mysteriously shuffled around. The Rosson House is quite small and cozy, so there aren’t many employees. There’s also a fireplace in the museum, and both visitors and employees have felt an unusual heat emanating from the fireplace, even though it’s rarely, if ever, used. Some have even seen the fireplace ignite on its own.

Phoenix is an old city, and history brings ghosts. Learn more about the haunted history of Arizona! From the old gold mine at the Superstition Mountains to the Hotel Congress in nearby Tucson. Or catch the ghost of Maddie while watching a show at the Orpheum Theatre. You can also read about the top ten haunted locations in Phoenix right here!