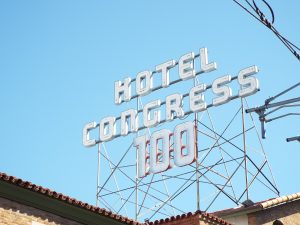 The Hotel Congress in Tucson is one of the most unique hotels in the country. Built in 1919 as Tucson was beginning to expand, the hotel has seen over 100 years of fascinating history come through its doors. The Hotel Congress survived Prohibition, a massive fire, and even served as a hideout for the infamous outlaw John Dillinger. Today, the Hotel Congress is a popular meeting spot for the people of Tucson, with a bar, club, and cafe serving the patrons of downtown. The hotel is notoriously haunted, and one paranormal expert calls it one of the most haunted locations in the U.S. Most of the paranormal activity happens after dark, and the owners have stated that it’s common for frightened guests to run out of their rooms in the middle of the night after a ghostly encounter.

Early History of the Hotel Congress

The Hotel Congress was built in 1919, as Tucson was beginning to boom. The cattle and railroad industries were bringing business to the area, and the hotel’s rear entrance was built right on the recently built Southern Pacific railroad station. The hotel’s placement on the train station brought business, as guests had an immediate place to stay.

The Hotel Congress was built as part of an extension of Downtown Tucson’s Congress Street, which includes the historic Rialto Theatre just a short walk up the street. The whole area was designed by Los Angeles architects William and Alexander Curlett, who also designed several buildings in LA.

The Hotel Congress was a gangster’s hangout during the 1920s. Gamblers and gangsters on the lam often played cards here. Card games often got violent when someone was suspected of cheating or game-rigging. Over the years, a number of card players had been shot dead at the Hotel Congress.

The hotel has a bar called the Tap Room; one of the most popular in Tucson. Because the Hotel Congress first opened during Prohibition, the Tap Room did not serve alcohol and instead functioned as a restaurant. The Tap Room claims to have been one of the first bars in the area to begin serving alcohol when Prohibition ended in 1933. Though, like many bars across the country, the Tap Room could have easily been a Speakeasy, where patrons could order drinks if they were trusted or knew the secret passcode.

John Dillinger and the 1934 Fire

In 1934, John Dillinger and his gang were hiding out in Tucson after a particularly high-profile bank robbery in Chicago. The Dillinger Gang were staying at the Hotel Congress using aliases to conceal their identities. On January 21st, a fire broke out in the basement of the hotel, which then spread up to the third floor through the elevator shaft. Dillinger and his gang escaped via a series of fire ladders through their window.

Despite making it out alive, they had left the luggage in their hotel room, including the thousands of dollars from their bank robberies. They tipped a group of firemen $12 each to go and retrieve the spoils, allowing the firemen to get a good look at the Dillinger Gang. Unbeknownst to the firemen, the luggage contained $25,000 and the gang’s firearms. One of the firemen, William Benedict, later recognized three members of the Dillinger Gang while reading a copy of True Detective. After alerting the authorities, the Tucson Police Department formulated a plan, then sprang into action a few days later on January 25th.

The first of Dillinger’s Gang to be apprehended was Russel Clark, who was traced to a house on 2nd Ave just over a mile away. He was arrested after a short struggle and was found with $1,200 in his possession. The next was Charles Mackley. The police found him at a radio store looking for a device that could intercept police chatter, with about $700 in his pocket. Pete Pierpont and his girlfriend Mary Kinder were arrested when the police staged a routine traffic stop, they had them come into the station for a minor traffic violation as a ruse. The two were surprised and arrested on the spot. Pete only had $100 in his possession, but Mary had about $3,000.

Dillinger was the last to get caught. He returned to the house where Clark was found, and the police moved in. Dillinger had around $7,000 on his person and leather bags with machine guns and about $20,000 in cash, as well as notes detailing an earlier bank robbery. The gang was extradited to the Midwest for trial, where most of their crimes had taken place.

In 1994, the Hotel Congress began to commemorate the events with ‘Dillinger Days,’ a festival that takes place every January at the hotel. The festival is complete with reenactments, a vintage car show, exhibits, and food and drinks.

Ghosts of the Hotel Congress

The Hotel Congress is one of the most haunted hotels in the country, according to paranormal experts. With over a century’s worth of history, there’s enough evidence and ghost stories to back that claim. Many murders and suicides have occurred in the hotel over the years. Most of the hauntings and ghost encounters take place at night, around 2 AM, and usually on the second floor. Many guests have fled their rooms late at night out of fear, and some even check out. Guests say they’ve felt queasy and incredibly uncomfortable, while others claim that they feel like they’re being watched or hear unusual noises in the hall. Same have even woken up to ghosts standing around their bed.

According to owners Richard and Shana Oseran, their ghosts aren’t like regular ghosts. They’re not transparent, and at first glance seems like normal people. You might see them out of the corner of your eye, but when you look they disappear. They might be set apart by their anachronistic appearance, with some appearing like characters from the early 20th century. One ghost, a man with a tophat, often peeks his head around the corner in the office, presumably to see if anyone is there.

Most of the ghosts in the Hotel Congress are said to be “stuck” in time, like playing back the recording of an old movie. They usually are seen doing the same things at the same time, and seem to have a routine. One always sticks his head through the upper floor window, another always walks through the kitchen, and there is a maid that is usually seen cleaning, but is not a known employee of the hotel.

One ghost, named Vince, was a man who lived in the hotel for 36 years in room 220. He was a sort of handyman around the hotel, and would often fix things with a butterknife in place of a screwdriver. Since he passed away in 2001, hotel staff have found butter knives from the downstairs Cup Cafe in various places around the second floor. Employees assume that Vince is still trying to fix things from the afterlife.

The Hotel Congress seems to almost be a hangout spot for ghosts and spirits. During times when no children are staying at the hotel, a young boy and girl can be seen playing in the halls. A former gangster named T.S., who wears a pinstripe suit, is usually seen looking through the second-story window. A woman wearing an all black dress haunts the reception area staircase, and guests who have seen her also say that she smells like roses.

Some paranormal experts say that these ghosts are actually impressions of people from the past, memories of former guests and patrons that are stuck in time. There is some evidence for this being the case, as some guests say that when they look out of the windows of their hotel room, they see old Tucson, with horse-and-carriage buggies and old locomotive steam engines pulling up to the train station. It’s even possible that the Hotel Tucson is some kind of flux in the space-time continuum.

Though most of the rooms at the Hotel Congress are haunted, room 242 seems to attract the most activity. It’s the most haunted room in the building, according to the owners. A woman shot and killed herself in room 242 while in a standoff with police. She was having a mental breakdown and planned to die via suicide-by-cop. After having a change of heart, she decided not to involve anyone else in her plot and shot herself in the head.

There is a cold spot accompanied by a dark shadow just outside the door, which is said to be the remains of her spirit. She also appears in the bathroom of the room or hallway just outside as a mostly cloud. She likes to whisper into the ears of guests and staff, and guests often report hearing strange noises and having bad dreams. A few people have woken up to her standing at the foot of the bed. She’s sent quite a few guests running scared.

Arizona may be known as “The Sweetheart State,” but its rugged history of coal mining, cowboys, and bloodshed may say otherwise. Learn more about Arizona’s haunted history, like the beautiful Superstition Mountains, home to a lost gold mine. You can also read about the top ten most haunted locales in Phoenix here!